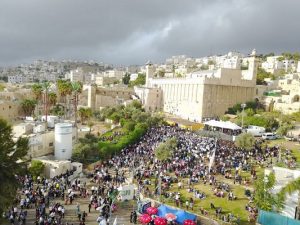 Despite early morning rain, tens of thousands flocked to Hebron for the concert.

In an ironic twist, the same week that over 30,000 people visited Hebron, the city became a focal point of the United States leaving UNESCO.

International media referenced Hebron as one of the points that finally pushed the Trump Administration to downgrade is membership from a full-fledged dues paying member of the United Nations body to a minor observer state status. Israel followed suit the same day.

In July, UNESCO United Nations Organization for Education, Science and Cultural Organization voted to declared Hebron’s Tomb of Machpela and old city as a “Palestinian Heritage site in danger.” Earlier in May, the UN body voted for a resolution on “Occupied Palestine” declaring sites in Jerusalem, such as the Temple Mount as Muslim only in character. They were the latest in a series of votes over the past several years denying Israel’s Jewish heritage and bowing to the Palestinian Authority’s campaign to use international bodies for their own propaganda advantages.

Meanwhile, on the ground, tens of thousands of Israelis voted with their feet as they sang and danced in the streets of Hebron’s Old City and visited the historical Jewish sites.

The main attraction of the festival was the concert headlined Benny Friedman, the best selling Jewish-American singer known for hits like Yesh Tikvah and Shloime Dachs, also from the United States.

Other musicians included Haim Israel, a popular Mizrachi style Israeli singer who performs every year and Udi Davidi who hails from the Southern Hebron Hills region and is a local favorite. New acts this year included Tzemed Yeled, a children’s group and a Jewish pop band called Omen.

Music wasn’t the only attraction. The recently opened archeological dig in the Tel Hevron neighborhood saw numerous tourists. Excavated by the Israeli Antiquities Authority, the remains include a 2,000 year old mikvah and wine press next to each other, indicating the site was used to produce kosher wine for export to Jerusalem to be used in the Holy Temple.
The archeological tour included rogram of biblical experience that included grape bites, pottery, meeting with historical figures, actors, inflatable and more, all for free.

The Hall of Isaac and Rebecca, the largest in the monumental Tomb of Machpela was open to the general public for two days over Succot. This section of the Cave of the Patriarchs complex is usually reserved for Muslim prayer services, however a sharing agreement with the Islamic Waqf allows for ten days out of the year for Jewish access.
The Tomb of Machpela is the burial place of the Jewish Matriarchs and Patriarchs, housed in a towering 2,000 year old structure built by King Herod the Great. The site attracts about 800,000 visitors a year, especially on Succot and Passover when the community hosts music festivals.

The city of Hebron houses many holy sites and ancient graves such as the cave of Othniel Ben Knaz, which saw some 1,500 people during Succot. The first of the Biblical Judges, Othniel assumed leadership of the Jewish people as described in the Book of Joshua. His tomb is located in the PA-controlled section of Hebron and is only accessible to non-PA residents on holidays. The multi-chambered burial cave corresponds to how the Mishna, in Bava Batra 101, describes the traditional burial practices of the Jewish people in that time period.
The day after Succot was Simchat Torah and the annual “second hakafot” celebration brought more crowds to the site for an evening celebration.

Prior to Succot, the other High Holidays, Rosh Hashannah, and Yom Kippur, also brought tens of thousands to the city. The third annual Women’s prayer gathering filled the plaza outside the Tomb of Machpela during the Ten Days of Repentance, and a day before, israel’s two chief rabbis, led slichot services.

The Jewish Community of Hebron dates back to antiquity and currently has a population of about 1,000 located in the old city, which recently was granted independent status from the Palestinian Authority controlled section of the city, where the main industrial areas, sports stadium and shopping malls are located. The adjacent Jewish community of Kiryat Arba has an additional 8,000 residents.
The other news item that rocked the press over the high holidays was the announcement that the Jewish Community of Hebron will now finally be divorced from the Palestinian Authority, which controls 80% of the city. Now, the 1,000 strong Jewish neighborhoods will have their own independent jurisdiction over garbage pick-up, electricity, street maintenance and other daily necessities which previously have been denied. The announcement caused an uproar in the Palestinian Authority who ironically cried discrimination, which it is they who have discriminated against the Jewish neighborhoods with lack of city services.

The news coincided with the Israeli government’s announcement of building plans for a slew of communities in Judea and Samaria, including Hebron, making it the first approved building project in twenty years in the city, Despite a strong demand for new housing and a plethora of empty and abandoned properties, the Jewish residents have faced a bureaucratic nightmare in obtaining zoning permits. Properties that formerly belonged to the pre-state Jewish community have been barred from being returned, and buildings purchased from Arab residents have been contested in court. The Jewish Community of Hebron welcomed the announcement and called for greater building permits for the fast-growing families and young couples.

Uri Karzen, director of the Jewish Community of Hebron stated, “we hope that the construction will commence in a timely manner, specifically in the Hezekiah neighborhood.” 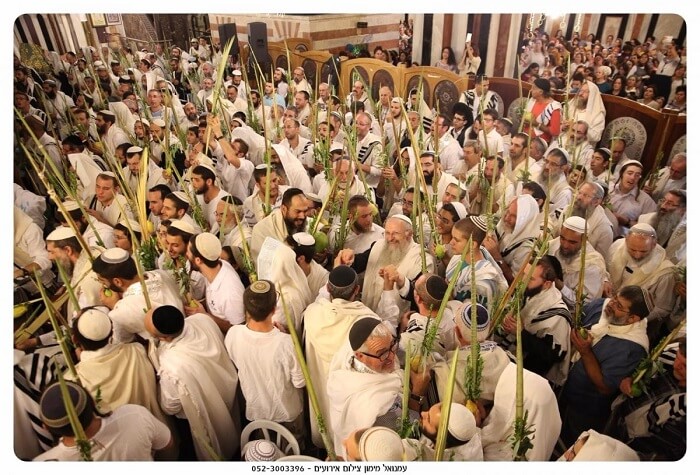