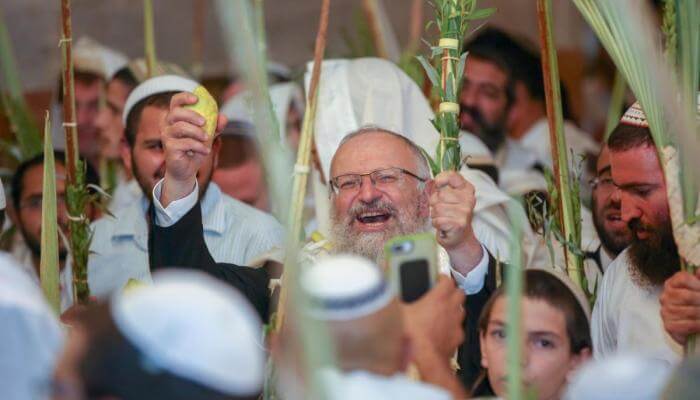 More than 40,000 people visited Hebron during the week of Succot. The director of the Jewish community of Hebron Uri Karzen, summed up the experience stating, “the lulav is just one of four species, each of which maintains its unique essence. Hebron, like teh lulav, is the one that connects all the species together to one united and happy nation with their matriarchs and patriarchs.”

Wednesday began with a musical hallel led by Rabbi Shmuel Eliyahu, chief rabbi of Tzfat and son of Israel’s celebrated Chief Rabbi, Mordechai Eliyahu. Thousands packed the Hall of Isaac, the largest in the Cave of Machpela complex, and location of the entrance to the underground burial tombs.

Local leaders in the Hebron community spoke including Uri Karzen, Ashi Horowitz, Rabbi Hillel Horowitz, spokesman Noam Arnon and others. Chabad of Hebron ercted a large sukkah and distributed thousands of free cups of coffee and cake to visitors.

Guided tours of historical sites in Hebron and the “Touching Eternity” visitor center took place as well as kids activities including arts and crafts.

The community is now preparing for Shabbat Parshat Chayei Sarah the weekend of November 3, 2018 .