From Judgement to Divine Forgiveness 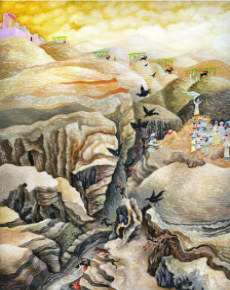 This painting depicts how the “goat to Azazel” is taken to a “barren land” and pushed off a cliff on Yom Kippur, as described in this parsha. The mishna describes how there were sukkas on the way to this barren land, and indeed we see these sukkas in the painting. It seems that there are purposely 5 Sukkot here corresponding to the 5 Prayers of Yom Kippur, which correlate, according to the Arizal, also to the five types of affliction on Yom Kippur: eating (and drinking), washing, anointing, prohibition on leather shoes, and marital relations. Notice also that there are 5 Stages of the goat falling off the cliff,
We see 7 Crows appearing very small near the third sukkah, and then getting larger as they approach the cliff. According to the Kabbalists, the crow is associated either with stern judgment or with the side of evil. The cliff in the barren Land they associate with the evil side which has greater power in a barren uninhabited land. The goat is considered a kind of “pacifier” gift to the evil side so that the evil side will be “involved” so to speak with this “gift” and cease its interference with the side of good, especially on the holy day of Yom Kippur. Similarly, there are 3 Dogs, which Kabbalistically are associated with the side of evil “klipat hakelev.” Indeed, these dogs are painted in the dark colors black/gray and brown/black hinting at the side of darkness and evil. Also, the whole valley/cliff where the goat of Azazel is thrown, associated with the side of evil as just explained, is painted in these same dark colors..
The two red strands on the other side of the cliff and may hint to the red thread tied to the goat of Azazel, also seen explicitly in the painting. However, these two strands as appearing as part of the cliff may hint to another deep concept which associates the color red to the attribute of judgment, and the number two is also associated by the Maharal and other Kabbalists to the attribute of judgment. Indeed the word for red in the context of the scarlet thread tied to the goat of Azazel is “shani,” which in a change of vowels spells “sheini,” meaning second, I.e the number two.
In contrast to this stands the priest, Kabbalistically associated with the attribute of kindness, the opposing attribute to the attribute of judgment. This priest is dressed in white which is the “color” associated with kindness. Ultimately, our Sages teach, when the goat of Azazel was thrown off the cliff the scarlet thread tied in the Temple miraculously turned white, showing how the attribute of judgment had been turned into supreme Divine kindness, mercy, and forgiveness upon all Israel.
Hebron, the leading Kohanic city in the Land of Israel is also a source of great Divine mercy upon Israel, as HASHEM “REMEMBERS THE KINDNESS of the Patriarchs and brings a Redeemer for their offspring for His Namesake with love.”