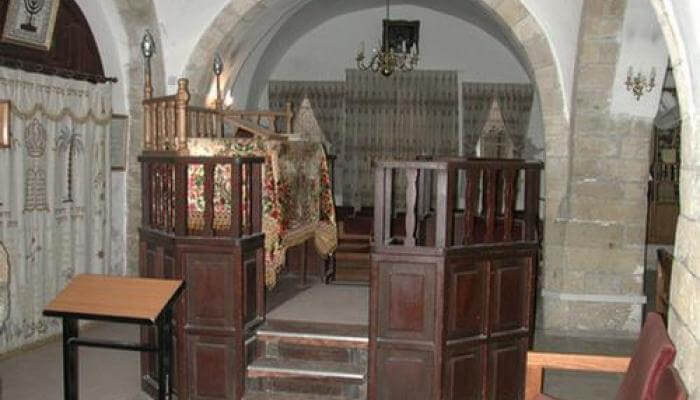 On one of the pillars inside the Avraham Avinu Synagogue is a plaque, with the cover page and introduction of a holy book, titled Emek HaMelech, meaning the Valley of the King. This book was authored by Rabbi Naftali Hertz Bachrach and published in 1648. It’s subject matter is Kabbalah, known popularly as “Jewish mysticism.”

Towards the end of chapter 9 of the author’s introduction is a short paragraph, short in quantity, but quantitatively, immeasurable.

The story is well known. The year was 1619, the location, Hebron:

A wondrous event on Yom Kippur, know that in Hebron there aren’t always ten for public prayer, only on Shabbat and holy days, when villagers gather there and pray with ten and more. But all the residents of Hebron are pious.

“And it was on the eve of Yom Kippur, and there were only nine men, and they waited for the villagers to arrive, but not even one came, because they had all gone to Jerusalem, which is a quarter of a day’s walk. And they were greatly saddened that on Yom Kippur they would pray individually and they wept much, and the sun was setting and daylight was disappearing.

And they lifted their eyes and here was an elderly man, in the distance, and they were overjoyed to see him. And when he arrived they offered him a final meal, but he blessed them and said that he had eaten on the way. And they worshipped on the holy day and honored him greatly.

And the next night they began discussions, because all of them wanted to host the guest in his home. And they compromised and conducted a draw, and the prayer leader (Chazan) was selected, he was a holy man who had wondrous dreams and night visions. And the Chazan led the guest to his home, with the guest walking behind him. And when he arrived at his home, the Chazan turned to honor the guest, that he should enter first, and he saw that the guest was gone.

And they searched the entire courtyard, but didn’t find him, and all were greatly saddened, thinking that the guest had left already that night, and did not want to enjoy anything from them. And that night the old man appeared before the Chazan in a dream and told him that he was Avraham Avinu, who had come to complete the minyon because he had seen that they were so upset about having to pray individually. And they were very happy and blessed the Great G-d, who had done wondrous things, Amen, May it be His Will.”

From then on, the synagogue was known as the Avraham Avinu synagogue.

In 1929, during the Hebron massacre, after incitement by Muslim clerics, residents of the Jewish Quarter of Hebron were murdered and raped and their homes destroyed by Arab rioters. The shul was desecrated and left abandoned.
When Jordan took control of the area in 1948, a wholesale market, trash dump and public toilet were placed on the site of the Jewish Quarter. A pen for goats and donkeys was placed on the ruins of the Synagogue.
After Israel won control over the West Bank during the Six Day War in 1967, a gradual return of Jews took place to the Jewish Quarter in Hebron. In 1976, due to the dedication and determination of one man, the late Professor Ben-Tzion Tavgar, the Israeli Government ordered evacuation of the animal pen, enabling the remnants of the synagogue to be uncovered, and the Synagogue to be rebuilt. In September 1976, on Rosh Hashana (the Jewish New Year), prayer services were held in the Avraham Avinu Synagogue for the first time since the Jews expulsion in 1929. After the holiday the site was declared a military zone and it wasn’t until 1980, when Beit Hadassah was resettled, that authorization to fully restore the shul was given. After the Synagogue was complete, the Torah scrolls that had been rescued from the shul by Jewish residents during the 1929 riots were returned to the ark there. 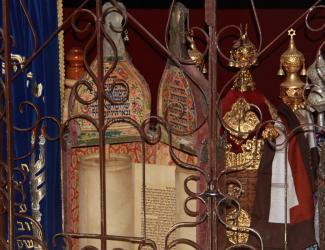 Today, the rebuilt synagogue is used each Friday night by the Jewish residents of Hebron to hold prayer services. The synagogue is also open to visitors each day of the week so they can learn about the history of the synagogue, and hold private services.
After the synagogue was rebuilt, additional houses nearby were reclaimed and others were built from scratch. In 1989, the Ministry of Construction and Housing built Beit Nahum vi-Yehuda (const. 1999) commemorating Nahum Hoss and Yehuda Partosh, residents of Kiryat Arba-Hebron, who were murdered in a terror attack in 1995. In 2001, after the murder of baby Shalhevet Pass, the deserted buildings of the “market,” built on the grounds of the Jewish quarter and abandoned by the Arab shopkeepers since 1985, were re-established and the compound was named Mitzpe Shalhevet in
her memory. Kollel Shalhevet Tehiyat ha-Aretz, a yeshiva for married men, was also founded in her honor. Kindergartens, a clinic and the community offices were also established in this neighborhood. The World Betar Movement built Beit Betar, which initially housed movement settlement “seed” groups in Hebron and now serves as a hotel (the Avraham Avinu guest house). Dozens of families comprising hundreds of Jews (may they multiply) dwell in the Avraham Avinu neighborhood today.

Prof. Tavgar, prior to his death, wrote a book called My Hebron which was published a few years ago in Hebrew. It was recently translated into English and is now available. The following paragraphs, dealing with the rededication of the Shul and its ancient Torah scrolls, are from the book.

While I was in the synagogue, waiting for the Torah scroll to be brought in, I looked around once again at the walls of the building. The synagogue was now splendidly built, more or less approximating its original form, before it was destroyed in the 1950s. There might have been a few minimal changes here or there, and perhaps not everything had been completed and it was still necessary to fix something or other, but on the whole, the synagogue now looked beautiful, it appeared splendid. One could even say that it was impressive, though not very modern.

I let my eyes wander around the interior of the synagogue. I had time to think and recall its previous state, five or six years ago, and thought of the sequence of events that had transpired. When I first came here, the place had indeed gone by the name of “Avraham Avinu Synagogue”, but its name had seemed completely disconnected from its essence. Nothing about it had indicated that it was a synagogue. It had been used as a goat shed. On its eastern side there had been a familiar, or rather, a notorious structure – the public latrine – which had been erected for the use of those who frequented the adjacent wholesale market, and the rest of the site was used as a garbage dump.

This place, where previously there had been a goat shed, which had symbolized our disgrace and humiliation, was magnificently renovated and the ancient synagogue was at its center. We can pray in it! This is not something insignificant! It is a great thing, but it is not the conclusive thing, at least not from my point of view. When I had begun to dig here I had not set a goal for myself only to renovate the synagogue and not even the entire Jewish Quarter. My aim had been to change the atmosphere that had enabled the entrenchment of a state of affairs wherein on the site where a synagogue had once been standing in full glory, suddenly three “magnificent” establishments are standing: a goat-shed, a public toilet facility and a garbage dump. According to documents, the functioning of the goat shed within the synagogue had been approved by the Israeli authorities. Someone had signed the leasing contract with the Arab who was using the structure to house his goats. Someone had signed and others had agreed to it, or had turned a blind eye, while on the other hand, there were Jews whose soul had desired to clean the synagogue, to prepare it and restore its original function, and to turn it once again into a place of prayer.

In any case, I felt very festive during the ceremony and was completely overcome by joy.