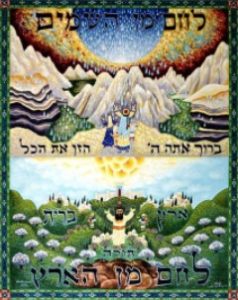 This parsha discusses Israel’s complaint against receiving “only” the Man as their sustenance. The painting here depicts a comparison or parallelism between the sustenance given in the Wilderness in the form of Man through a Divine miracle versus the sustenance given in the Divine Land in the form of bread.
In the top painting, we see the Man depicted as a blue/white dew-like crystal, as is depicted in the Torah. It seems that Blue is also used for the color of the Man – bread of heaven that comes from the “azure-blue” heaven/”sky”.
In the painting depicting the “Bread from the earth” – here the face of the hasid is facing us, earthly man, versus the painting of the “Bread from Heaven,” where the hasid and family are facing the heavens. This again shows the difference between the types of bread, one heavenly and one more earthly.
In the painting depicting the “Bread from the earth” we see three types of praise we mention in the blessing upon the Land in Birkat Hamazon: praise upon the Land, the covenant of Brit Mila, and the covenant of the Torah. The significance of these matters in Birkat Hamazon would deserve a much fuller discussion, but here we will relate how these thee matters are illustrated in the painting, as if in three columns, to the right, left, and center. The word “Aretz -Land” is seen to the right as Kabbalistically the right represents the bestowing of Divine Light from the Divine, and indeed the Holy Land is the threshold of the Holy Presence. The word Brit-covenant is seen to the left, as this represents the spiritual work on the side of the receiver of the fore-mentioned Divine light, Israel, and receptivity is associated with the left side Kabbalistically. We see Torah in the middle, as the Torah represents the bridge that connects us to the Divine light.
At the top of this painting we see ten sun circles that serve as a bridge between heaven and earth, between the painting on the bread of Heaven and the painting of the bread of the earth, through the ten Divine sefirot,.
Another matter to consider in regard to the right/left sides of the painting: we see 13 white trees on the right side which is associated with the masculine according to the Kabbalists, and indeed a male becomes a bar mitzvah at the age of 13. On the left side, associated to the female, we see 12 white trees, and indeed a female has her bat mitzvah at the age of 12. The significance of this in this painting may be that just as there is a covenant in regard to the Land, circumcision and Torah as depicted in the upper part of this painting so too there is a covenant taken on at the time of Bar Mitzva and Bat Mitzva and that this covenant can be likened to a tree rooted in the earth. In the same way, our covenant with Hashem attaches us to our spiritual “roots” with Hashem, thereby also allowing us to root ourselves in the Holy Land in a deep and steadfast way. Of course, Hebron, Beacon of the Holy Land, unites us to our spiritual roots and our Holy Land in one of the deepest ways.