The 17th of the Hebrew month of Iyar marks the anniversary of the murder of “The Six.” 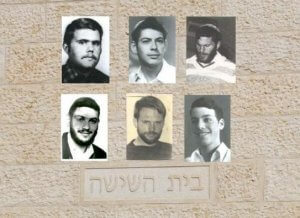 On May 2, 1980, six young men were murdered in an ambush attack outside the historic Beit Hadassah building in Hebron’s old city. The attack also injured over a dozen people. But the story begins long before that.

In memory of "The Six" murdered at Beit Hadassah in Hebron

Joe Grob is a New York City attorney, a lover of Hebron, and a friend to Tzvi Glatt who was murdered 36 years ago in front of Beit Hadassah.

Posted by Hebron Jewish Community and Biblical Heritage Site on Tuesday, May 24, 2016

The construction of Beit Hadassah took place in 1893 at the initiative of Rabbi Haim Rahamim Yosef Franco, chief rabbi of Hebron. It served as the country’s first Hadassah hospital, now the world renown Hadassah Medical Center headquartered in Jerusalem.

It was in this building that a group of women and children camped out in an effort to reestablish a normal Jewish community in Hebron. They lived there for a year as groups of supporters of the new inhabitants encouraged them. (Read more about the return to Beit Hadassah here).

On Friday nights, following Shabbat prayers at Ma’arat HaMachpela, the worshipers, including students from the Kiryat Arba Nir Yeshiva, would dance to Beit Hadassah, sing and dance in front of the building, recite Kiddush for the women, and then return to Kiryat Arba.

One Friday night, in early May of 1980, a year after the women first arrived at Beit Hadassah, the group of men, who came to make Kiddush and give strength to the women and children, were attacked by terrorists stationed on the roof of a building across from Beit Hadassah. The Arab terrorists, shooting and throwing hand grenades, killed six men; Zvi Menachem ben Shmuel Chaim – Zvi (Howie) Glatt, Gershon Klein, Ya’akov Zimmerman, Hanan Krauthammer, Eli HaZe’ev, and Shmuel Mermelstein, and wounded many others. Later that week the Israeli government finally issued official authorization for the renewal of a Jewish community in Hebron.

On June 11, 2000, twenty years after the murder at Beit Hadassah, a new building in memory of those men killed was dedicated in Hebron. Beit HaShisha, the House of the Six, houses six families. This beautiful structure eternalizes the names of six young men who gave their lives in Hebron, and whose deaths led to the return of Jews to the heart of the city. Hebron’s Jewish community had to wait twenty years to memorialize these men, but that dream is now a reality. May their memories be blessed. 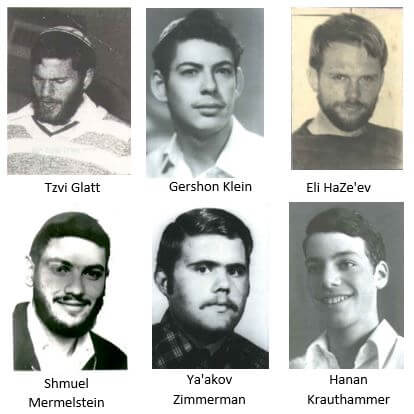 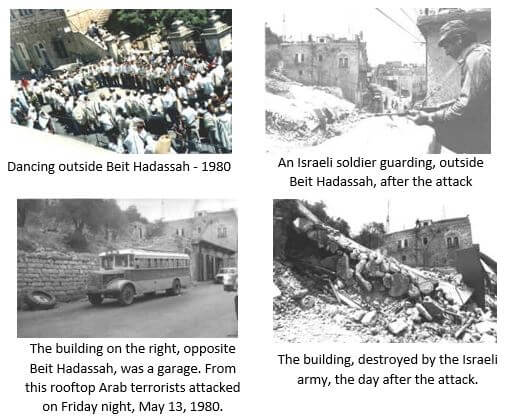 Prof. Jerold S. Auerbach, author of Hebron Jews: Memory and Conflict in the Land of Israel wrote in 2000, the year Beit HaShisha was dedicated the following:

“On the way to Beit Hadassah the worshippers sang a verse from the prophet Jeremiah: v’shavu banim l’gvulam (“Your children shall return to their borders”). Among them were Zvi “Howie” Glatt, a recent American immigrant; yeshiva students Gershon Klein, Yaakov Zimmerman, Shmuel Mermelstein and Hanan Krauthammer, who had chanted the Song of Songs during the service; and Eli HaZe’ev, winner of a Silver Star for bravery in Vietnam who came to Israel during the Yom Kippur War and converted to Judaism.

Once at Beit Hadassah, they would make Kiddush before heading up the hill to Kiryat Arba, where a small Jewish community had been established nearly a decade earlier.

Eli HaZe’ev was killed instantly, before he could reach for his gun. Miriam Levinger, trained as a nurse, rushed outside to treat the wounded, but nothing could be done to save Glatt, Klein, Zimmerman, Krauthammer, and Mermelstein. She would say, “Not only were their lives a continuation of the lives of the murdered community [of 1929], but also their deaths.”

But from those six deaths would come new Jewish life in Hebron. Beit HaShisha (“House of the Six”), with apartments for six families, was built adjacent to Beit Hadassah to commemorate the massacre victims. Now, after thirty years, may their memory be a blessing.”

Israeli Ambassador to the United Nations Yehuda Blum described the attack in a letter to Secretary-General Kurt Waldheim on May 4, 1980. “Once again the aim was mass murder for its own sake. Target was a peaceful group of worshipers returning from prayer, and the timing was the Sabbath eve.”

In the United States, about 1,000 people demonstrated in front of the PLO offices in New York City. A JTA report from May 7, 1980 quoted Tuvyah Gross, national youth leader of Bnei Akiva saying:

“These kids were vibrant, warm, concerned, gifted typical American kids. [This is] our way of venting our anger, frustration and pain. And by making them more than just names in a list, we hope to personalize them and memorialize them.”

Unfortunately, decades later, the ideology that perpetrated the murders still lives on.

An article printed in May 2016 reveals that the Facebook page of the Fatah organization which claimed responsibility for the attack commemorated it, and called the perpetrators, “heroes.”

In 2013, news media covered the appointment of one of the attackers to a management position for the trust that runs the non-Jewish side of the Tomb of Machpela. The newly installed manager was reported to have posted old photos of his terrorist days on his Facebook page.

In 2016, the Times of Israel reported on a teacher who was awarded $1 million “by the UK-based Varkey Foundation’s Global Teacher Prize at a ceremony in Dubai earlier this month for a curriculum she called ‘No to Violence.’

Her husband served 10 years in an Israeli prison after being convicted as an accomplice in a deadly 1980 bombing attack in Hebron in which the victims were walking home from Friday night Sabbath prayers, The Associated Press reported. Omar al-Hroub was a chemist who provided chemicals needed for making the bombs, the AP reported.”

However, friends and family of The Six have fond memories and see a hopeful future.

A moving article published in the Times of Israel last year commemorated the courage of one of those young men. Joseph A. Grob, a childhood friend of one of The Six penned “Searching for Zvi “Howie” Glatt z’l On His 35th Yurtzeit.” 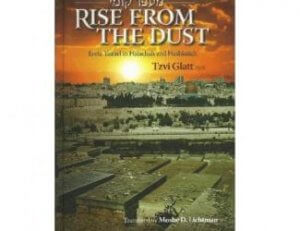 A book of Zvi Glatt’s writings was published in Hebrew posthumously entitled Meafar Kumi and recently published in English as Rise From the Dust: Eretz Yisrael in Halachah and Hashkafah. An article in The Jewish Star from July 2, 2014 interviews Zvi’s sister and a friend about the man and his writings.

“A budding Torah scholar, Tzvi combed Jewish legal and philosophic texts, delving into the commandment to live in Israel from all aspects, taking notes that after his death, were combined into a book now translated into English…”

To arrange a visit to Beit HaShisha and other sites in Hebron, contact us.