The Rock You’ve Been Carved From 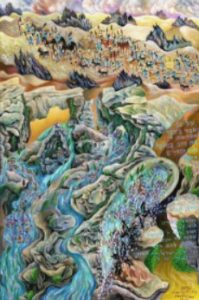 Just as the Midrash describes, in this painting we see the Israelites passing through the Wilderness with the Holy Ark, etc., as if not noticing the great miracle that occurred upon them: the Amorites are crushed in the Arnon river, and indeed we see at the side of the painting the verses that pertain to the miracle of the Arnon river and the Song of the Well sung when the Israelites ultimately realized the great miracle when they saw the waters that flowed with the body parts of the Amorites. We also three black crows in the abyss with the crushed Amorites, a theme also seen in the painting of Aharei Mot depicting the death of the goat of Azazel, associated with the side of evil. Here too it seems that the crows are associated with the evil Amorites, showing the harsh judgment upon them. Indeed our Sages describe the crow as representing harsh judgment, sometimes in a positive sense, but yet at some contexts in a negative light, indicative of the cruelty of the wicked.
In terms of the colors of this painting, we see the Israelites painted in bluish dyes, as blue represents heavenly wisdom according to the Kabbalists. They pass through the barren Wilderness, which has a number of blackish hills which represent the tendency of the Wilderness/uninhabited land toward spiritual darkness or evil, but Israel passes through all this with Divine Guidance and Aid, raising the spiritual sparks from this dangerous area spiritually, according to the Kabbalists.
The first Jewish battle, conducted by Avraham, our father, is described to originate from Hebron. Our Sages teach that what our Patriarchs did is an “omen-siman” to their offspring. Thus Hashem’s battling for Israel, crushing the Amorites as depicted in this painting, may be seen as Hashem’s love of Avraham crushing his offspring’s enemies by rocks of waters, with which Avraham is associated. Avraham, the Patriarch of kindness, is associated to water also associated to water by the Kabbalists. Avraham is also associated with a rock as the verse says, “look at the rock you have been carved from… look at your father Avraham etc.” (Isaiah 51, 1-2)