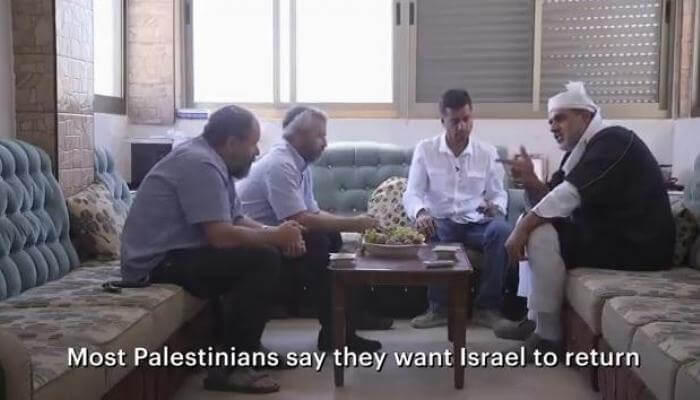 Noam Arnon and Yishai Fleisher, who serve as spokesmen for the Jewish community of Hebron were profiled in a lengthy article and video for The Atlantic, an American news magazine.

The article entitled “A Muslim Among Israeli Settlers – What happens when a Pakistani American writer goes deep into the West Bank?” was written by Wajahat Ali who travelled to various communities in Judea and Samaria. An accompanying video entitled “Israeli Settlers in the Occupied West Bank” has garnered almost 10,000 in two weeks.

In Hebron, the author mentions that the Jewish residents are restricted in the ability to expand their neighborhoods or buy property. He joins Fleisher and Arnon in a visit to a member of the Arab community of Hebron. At the home of Mohammed Jabbar, Ali questions whether he is being used for “pro Israel propaganda”. Jabbar responds that “The Jews don’t butcher us like our Arab brothers. like the Arabs killing Arabs in Iraq and Syria. Jabbar also stated that “most Palestinians say they want Israel to return and govern over this area.” From 1967 to 1997 Israel had jurisdiction over the city. The Hebron Accords divided the city into an 80% PA area and a 20% Israeli controlled areas of which Jewish civilians are only allowed in Jewish neighborhoods.

Ironically, although many anti-Israel activists site Hebron’s King David Street (Shuhada Street) as an example of Israeli apartheid, the fact that a Muslim writer walked there to conduct the interviews is proof of the falsehood. Ali also interviewed Arab residents of the H2-Israeli controlled section of Hebron who insisted they would never sell their property to Jews even when offered large sums far above market value.

After the publication of his article and accompanying video, the author of the article Wajahat Ali, wrote a follow-up article on the reactions. In a new article with The Atlantic entitled I Talked to Zionists—Then I Was Disinvited by a Major Muslim Group Ali wrote that he was uninvited from several functions and faced protesters at speaking engagements. He wrote: “…why does the issue of Palestine stand alone next to “creed”? Does that mean Palestine is a religious issue, and not a purely political question as many activists and academics have long insisted? Why is this issue more important than, say, the genocide of Rohingya? The conflict in Kashmir? The plight of the Uyghurs in China? The massacre of innocents in Syria? Do these issues not rise to similar importance?”