The Theme of Four 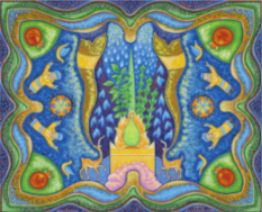 Some of the themes in this painting can be paralleled to those we have already studied, such as the gazelles and Shofars, in Parashat Toldot. The number four is a motif that can be seen here in the context of the four species, four dancing hasidim, four birds, four pomegranates within four green “shells”, and a four-sided rectangular frame with four “lopes” on each side with also four yellow “points” at the center of each side. It seems that there are four aspects of four corresponding to the four holidays of the month of Tishrei, mentioned in parshat Emor, read this week in the Diaspora: Rosh Hashana, Yom Kippur, Sukkot, and Shmini Atzeret/Simchat Torah. The chassidim who dance correspond to Simchat Torah, the four species correspond to Sukkot, and the bird corresponds to Yom Kippur, when one goat [to Hashem] is slaughtered and one goat [to Azazel] remains alive and is sent away. Commentators compare this procedure of spiritual purification and atonement on Yom Kippur to the process of purification for the leper when one bird is slaughtered and one bird is sent off. Of course, the shofarot corresponds to Rosh Hashana as well as the pomegranates, which are customarily eaten on Rosh Hashana as an omen for a year full of merits just as the pomegranate is full of seeds. It seems that the green frame around the painting may hint at a sukkah structure with green schach.
We see the four species as if emerging from the fire of the altar. Indeed, the altar in the Temple is a central interest on Sukkot in the Torah, as the taking of the four species is directly associated with the Temple, as it says “and you shall take on the first day a fruit etc. and be joyous before Hashem your God [I.e in the Temple as our Sages interpret it] seven days. Not only this, but the custom was to encircle the alter with the four species (as we do in hakafot today in synagogues) and say “beautiful to you O altar” (see Mishna Sukkot chapter four).

There are also two circles, each containing a figure within them six points. It seems that each of them hints at the six directions the four species are waved. In addition, the circle may represent the encircling of the hakafot with these species. As we mentioned in the past, a theme of duality in Nachshon’s paintings may represent unity between masculine and feminine aspects, especially in the context of two gazelles. Indeed, according to the Kabbalah the waving process from and to oneself represents a “bringing” of spiritual lights from a “masculine” spiritual aspect to a “feminine” spiritual aspect. This theme of unity and also the identity of the Sukka as the “Sukka of peace” as we say in our prayers are all primary themes of Hebron, City of Unity – “hibur” – and Peace, as the Sha’ar Hahatzer (380) says that the names of our Patriarchs Avraham Yitzhak and Yakov are numerically equivalent (638) to “Nezer Hashalom” – “The Crown of Peace” – and also to “Shalom BeHebron” – “Peace in Hebron!”