Hebron celebrated the Festival of Lights while staying safe. 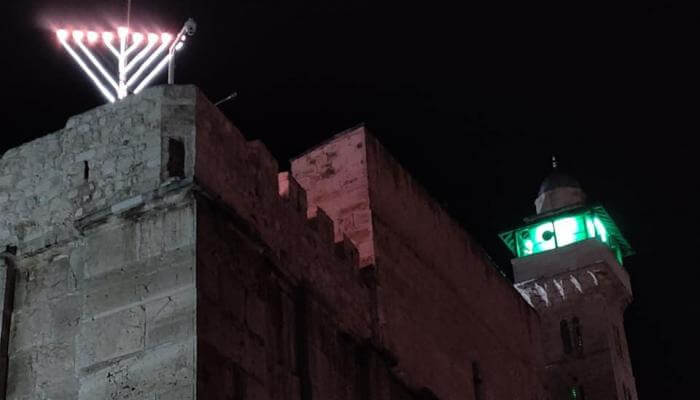 The Jewish holiday of Hanukkah was celebrated in Hebron in a festive manner despite the ongoing COVID-19 pandemic.

The non-profit organization’s recent CauseMatch campaign was a success, bringing in donations for needy families who have been unemployed or underemployed due to coronavirus. To learn more click here.

As part of the Hebron Fund’s educational mission, the Project Connections program invited the parents of pre-army Israeli students to visit Hebron and light Hanukkah candles with residents.

The annual candle-lighting ceremony was held at the Tomb of the Patriarchs & Matriarchs, as usual, but in a limited fashion to maintain social distancing. The usual veteran Hebron pioneers who have been in the city since the late 1960s stayed home this year to avoid catching coronavirus.

Elected officials, police and army personnel were honored with the lighting of the candles. Of note were IDF Colonel Salim Saad, who is of the Druze faith and Rabbi Yosef Nachshon, son Hebron pioneers Baruch and Sara Nachshon who was the first baby to have his brit milah ceremony inside the Tomb of the Patriarchs in modern times. Others who led the candle lighting ceremony included:

The giant hanukkiyah, [Hanukka menorah] was once again affixed to the roof of the Tomb of the Patriarchs & Matriarchs complex. Lit is bright neon, the menorah illuminated the cold nights atop the 2,000-year-old Herodian walls that enclose the Cave of Machpela.

Mahmoud Al-Habbash, the Palestinian Authority’s Supreme Shari’ah Judge and Advisor on Religious Affairs and Islamic Relations to President Mahmoud Abbas blasted the Hanukkiyah as a “war crime” according to WAFA, the official PA news agency, as translated by Palestinian Media Watch.

“The occupation state… is exploiting every opportunity, and particularly the so-called Jewish holidays,” Al-Habbash stated, “in order to commit crimes and plans that desecrate our Islamic holy sites in Hebron.” He added that the Tomb of the Patriarchs and Matriarchs is a strictly Islamic holy site and non-Muslims should not have access to it.

The Palestinian Authority side of the City of Abraham has seen an alarming increase in the number of COVID-19 cases leading to a week-long lockdown. Arab clans who opposed the lockdown clashed the PA forces leading to injuries.

The PA has controlled 80% of the city since the 1997 Hebron Accords. Because Israeli residents are restricted to the Israeli side of the city, the epidemic has not affected the Jewish neighborhoods. However in Israel, the number of cases are still cause for concern. The Israeli government was close to imposing an evening curfew during the Hanukkah holiday to curb the spread of the virus, but officials voted against the measure. The first batch of COVID-19 vaccines arrived in Israel during the holiday.

A candle-lighting ceremony was also held in the Casbah in Hebron’s Old Town, in front of the site of the ancient There Menorah Lintel. Today a bustling outdoor marketplace, the area was once a Jewish neighborhood. The stone etching of three menorahs dated back to Roman times according to some researcher. It was destroyed by vandals in 2014 and replaced with a replica this fall. For a full article on this historic artifact click here.

Hanukkah celebrated the victory of the Maccabees who defeated the Assyrian-Greek army. Several of their decided battles were fought and won in Hebron and the surrounding Hebron hills region. For a full description of Judah Macabee and his adventures in Hebron read here.