Objections to elevator for wheelchair-bound visitors rejected by government, clearing way for construction. 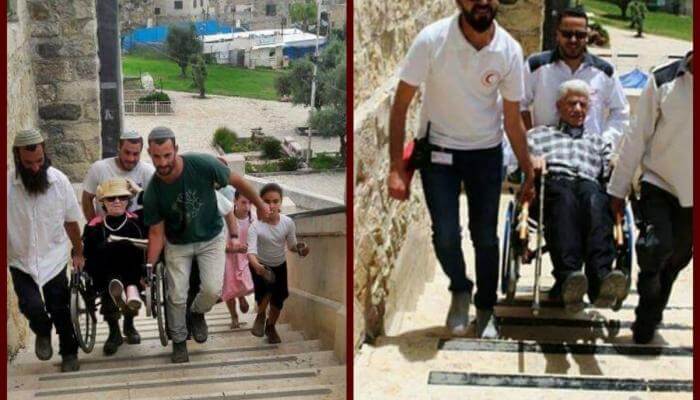 After years of political obstacles, the handicapped access project for the Tomb of the Patriarchs and Matriarchs in Hebron has received final approval. Israel’s Ministry of Defense issued a directive to the subcommittee for planning and licensing in the Civil Administration to approve the building permit.

The latest hurdle was a protocol that requires 60 days be given for objections to be raised by the public. Two objections were filed, one by the Hebron Municipality which runs the Palestinian Authority side of the city, and the other by Emek Shaveh, a foreign-funded Israeli NGO which specializes in opposing archeological excavations. Both objections were formally rejected last week paving the way for the project.

The Tomb of the Patriarchs and Matriarchs is the colossal 2,000-year-old Herodian complex built to memorialize the Cave of Machpela. According to tradition, the Biblical founding fathers and mothers of monotheism are buried underneath. In 2019, the site received a record number of over 1 million tourists, a number that steadily grew over the past decade due to increased public interest.

The steep steps made it difficult if not impossible for disabled and wheelchair-bound visitors to access the site.

COGAT – the Coordinator of Government Activities in the Territories, the Defense Ministry body that overseas civilian issues in Judea and Samaria, had their Archaeological Unit closely study all stages of design and produced three alternative blueprints. The plans were presented to those who filed objections for review. Emek Shaveh has previously opposed the opening of the Tel Hevron Archaeological Park where ancient mikvot and Jewish wine presses were discovered.

The Patriarch’s Tomb is thought to be the oldest still-standing building still in use for the purpose it was erected. Therefore, great sensitivity was taken into consideration to retain the architectural integrity and aesthetics of the structure. Built by King Herod the Great as a memorial for Abraham, Isaac and Jacob, Sarah, Rebecca and Leah, it closely resembles the Western Wall in Jerusalem, part of one of the king’s other great structures, the Holy Temple. Elevator access to the Western Wall (Kotel) plaza area has been in the completion stages this year.

Architectural renderings of the proposals show an elevator alongside the “newer” section of the complex, built well after the original Second Temple Era structure. In the 10th century, a building known as the qal’ah (also spelled kalah, i.e. castle) was constructed near the middle of the southwestern side. In the late 14th century, under the Mamluks, two additional entrances were pierced into the western end of the south western side and the kalah was extended upwards to the level of the rest of the enclosure. The original Cave of Machpela, dates back to the days of Abraham, when he purchased it for 400 shekels of silver as a burial site for his beloved wife Sarah.

Journalist Sheri Oz, noted in a recent article that an elevator and wheelchair ramp would benefit Muslims, Jews and people of all faiths making a pilgrimage to the historic site.

She reported that at one of the planning meetings, Samer Shehadeh, the lawyer representing the PA’s Hebron Municipality commented a number of times about the importance of the project and asked for documents detailing the specific design plans of the three alternatives considered.

An access path allowing people with disabilities to reach the Rochelle Berkowitz Plaza area in front of the Machpela complex from the parking lot is also planned.