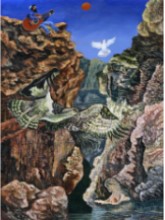 Here we see a dove, which our sages saw as the symbol of Israel (Shabbat 33). Note also that the white dove has a blue tail, and the man is dressed in blue with a white cap. White and blue can be associated with Israel since the talis, the Jewish garment has white and blue – “techelet.” In the past we mentioned that white and blue are Kabbalistically associated with the highest spherot of Keter-crown and Hochma-wisdom.
We also see an eagle, which seems to mark the verse of this parasha that says “As an eagle raises its nest over its young, it soars” – a hint that G-d carries Israel, as it were. We see a man singing a song with a guitar similar to the song of this parsha Ha’azinu.
A crocodile, seen in the painting, is considered a symbol of evil in many verses and teachings of our sages. Therefore, it is not surprising why this crocodile is near the dark hole depicted in this painting, since darkness is also considered a symbol of evil.
Taking all these images/symbols together it seems that the man and the dove we identified with Israel could have easily fallen off the cliff if they had not found rest on this amazing cliff. The result would have been entry into the crocodile abyss and the darkness of evil. However, among them is the savior eagle, apparently a symbol of God’s salvation of Israel throughout the generations.
Hebron, the Jewish city of eternity, also stands as a living symbol of God’s eternal salvation which causes Israel again and again to return to their homeland and their hometown, no matter what happened to them throughout the tribulations of the ages, for the final redemption..