Hebron was a thriving center that transported goods to Jerusalem during the First Temple Era.

Over 120 jug handles and other artifacts were discovered in July in Jerusalem at a huge archaeological site dating back to the First Temple Era. Many of the jug handles were inscribed with the words “to the King, Hebron.”

The ancient LMLK seals, named for the Hebrew letters meaning “To the King,” or “L’Melech,” were first discovered by the famous British archaeologist Sir Charles Warren of the Palestine Exploration Fund who published his findings in 1870.
In the 1970s, more LMLK seals were unearthed in Lachish and later in 1999 in Hebron’s Tel Hevron neighborhood. 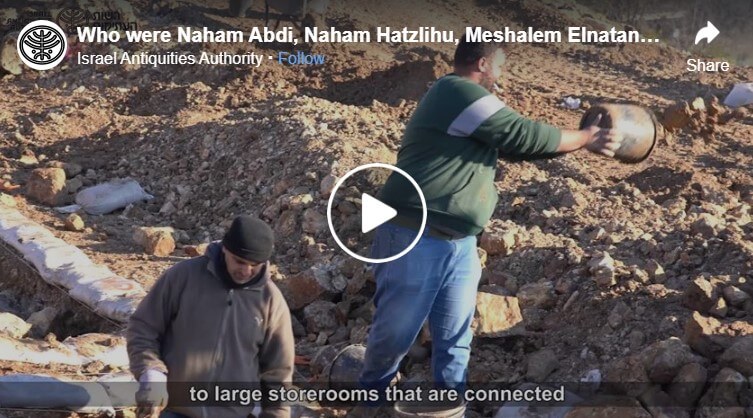 The new discovery, like the others, includes jugs embossed with the names of four locations including “To the King, Hebron,” “to the King, Ziph,” “to the King Socho, and “to the King, MMST.” Ziph and Socho are located in the Hebron Hills region, while the location of MMST, thought to be Mammeshet, is not confirmed.

The new finds date back 2,700 years ago and were discovered in a huge archeological area in the Arnona neighborhood of Jerusalem. Some of the jugs and jars also bore Hebrew names such as Meshalem Elnatan and Naham Hatzlihu. The researchers believe they were the names of wealthy individuals or royal officials.

Neriya Sapir and Nathan Ben-Ari, the directors of the excavation on behalf of the Israel Antiquities Authority called it “one of the most significant discoveries from the period of the Kings in Jerusalem made in recent years.”

The IAA said in a statement, the royal storage center was from the days of King Hezekiyah (Hizkiyahu) and King Manasseh (Menashe), as mentioned in Bible and called the site “and extraordinary structure in its size and character.”

The dig is located in a barren tract of land near the United States embassy in south Jerusalem near Derech Hevron (Hebron Road) which connects the two cities.

“Evidence shows that at this site, taxes were collected in an orderly manner for agricultural products such as wine and olive oil.” Sapir and Ben-Ari stated.

The jugs were probably used to store food or grain and may have been made in the Hebron region and then transported to Jerusalem. They indicate the importance of Hebron, the Hebron Hills, and Jerusalem in the days of the Kings of Judea.