Saga of right to buy property in City of Abraham continues. 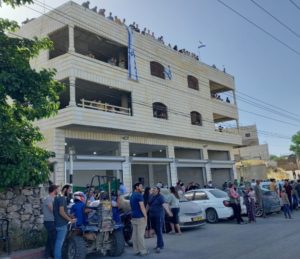 A vacant three-story building now called Beit Tekuma (House of Revival) was purchased and inhabited Friday. Located on the edge of the Israeli side of Hebron near Kiryat Arba, on May 13, 2022, a group of Israelis arrived at the building and made preliminary renovations to the structure which had no running water or electricity.
The residents spent the Shabbat in the building and left by Monday morning after an agreement with the Israeli government was reached.
Located on the road from the edge of the old city of Hebron leading to Kiryat Arba, the structure was purchased by the Harchevi Makom Ohalech organization which has successfully acquired other properties in the city such as the Beit Rachel and Beit Leah building near the Tomb of the Patriarchs and Matriarchs.
Shlomo Levinger of the Harchevi group said “we are continuing the Zionist endeavor of redeeming the land. Especially these days, we want to be clear that Jews can buy a home anywhere in the Land of Israel, particularly in the city of our forefathers,” he said as quoted by the Jerusalem Post. Fifteen families moved into a building and had already been accessing the site for close to a month, the Jpost reported.
VIRAL VIDEO
Yishai Fleisher, the international spokesperson for the Jewish community of Hebron was on the scene Friday as the new residents prepared for the Sabbath. As of Sunday, his short Twitter video of workers fixing up the dusty, broken structure had over 1 million views, 2,000 shares and almost 2,000 comments.
Israelis who live in Judea and Samaria need extra permission from the Ministry of Defense to dwell in homes even when the purchases are verified. In the case of the Israeli neighborhoods in the divided city of Hebron, new purchases are rare and new buildings have not been built in almost 20 years.
PA DEATH SENTENCE
It is illegal for a Palestinian Authority resident to sell property to Israelis, an offense punished by death, thus groups like Harchevi often use a third party for such purchases and assume that the seller in question will publicly deny the sale.
Haaretz news reported that a man named Mohammed Ja’abari claimed to be the registered owner. Wafa, the official PA news outlet reported the building was owned by Walid al-Ja’abri.
Ibrahim Al Jabari posted on Facebook said that he did not agree with the transaction and condemns any Jabari who sold the property to Jews. A prominent member of the large and influential clan in Hebron, he issued a statement that Mohamed Eid al-Jabari sold the building to Abu Ali Harhash of Jerusalem for 500,000 Jordanian dinars ($705,000) who then sold it to a Jewish group. Ibrahim Al Jabari then vowed to expel him from the clan.
Beit Tekuma is located near another contested property bought by Israelis called Beit HaShalom. First inhabited in 2007, the building, which was purchased for $1 million went through numerous court cases and evictions before being settled in favor of the Israeli owners.
Another purchase was the vacant Beit HaMachpela building, across from the Cave of Machpela. The Palestinian Authority resident who arranged the sale of the property, Muhammad Abu Shahala, was arrested for the crime of selling land to Jews in 2012 and sentenced to death.
THRIVING ARAB METROPOLIS
Since 1997, Hebron has been divided into H1, controlled by the PA and H2, controlled by Israel. The H1 section which comprises 80% of the city is sprawling and highly industrialized, accounting for most of the manufacturing and economy for the Palestinian Authority. New construction is constant with such large scale projects such as the new section of the multi-story Hebron Center recently opened.
TERRORIST ATTACKS
Beit Tekuma is located on the road from Kiryat Arba to Hebron near where a deadly terrorist attack took place in 2001. David HaCohen, age 28 and Yehezkel Mualem, age 49 were murdered by a terrorist shooting attack. A makeshift synagogue called Hazon David was erected on the spot near their murder. The synagogue has repeatedly been dismantled by the authorities.
Another path from Kiryat Arba to Hebron, called Worshipers Way was targeted in 2002 by a terrorist ambush leaving 12 people dead and scores injured.
JEWISH RESIDENTS LEAVE, VOW TO RETURN
Hundreds of Israeli supporters arrived at Beit Tekuma reacting to news that the IDF Civil Administration, which has jurisdiction over Israeli civilians in Judea and Samaria, would evict them.
Amid singing, dancing and Israeli flags fluttering in the breeze were several Members of Knesset who voiced their support on Sunday. MK Bezalel Smotrich, head of the Religious Zionist Party said he hoped the residents would be allowed to stay as did his collage MK Orit Strook, a resident of Hebron.
MK Yariv Levin and MK Amir Ohana, both of Likud, also called the new purchase a positive step.
The Peace Now organization which opposes Jewish purchases in Judea and Samaria condemned Beit Tekuma. “It doesn’t matter if it was legally purchased,” stated, Hagit Ofran of Peace Now’s Settlement Watch team, adding she hoped the Defense Minister would evict them.
The residents reached an agreement with the government to peacefully leave the building in exchange for IDF troops securing the structure until the legal issues can be ironed out.
Representatives of the Jewish community said, “Jews in Hebron must have to the right to purchase and Arabs must have the right to sell without fear of punishment and death.”
MK Strook posted a photo of the now empty structure still adorned with Israeli flags and a large banner reading Beit Tekuma on Monday morning. “It is important to mention there is no legal basis for evacuating the house from,” she wrote, “ownership of the home is 100%. A transaction permit can and should be given within 5 minutes.” The buyers reached an agreement with the IDF on securing the house from PA squatters, she added.
This article was originally found here
Menu