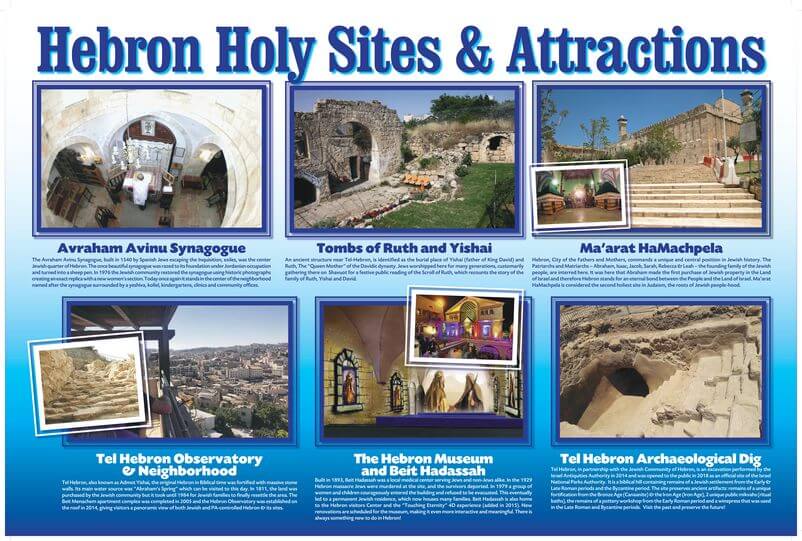 The holy city of Hebron, located just 20 miles (32 kilometers) from Jerusalem, is a “must visit” place for anyone who cares about the Bible, archaeology, or ancient and modern Israel. The city is mentioned 87 times in the Bible and is the second holiest city in the world, just after Jerusalem. In fact, it is listed as one of the top 10 cities to see in Israel.

Hebron is the place where your feet literally walk the same steps and paths as the three patriarchs of Judaism, Abraham, Isaac and Jacob. It is not only holy to the Jewish people but also Muslims and Christians.

A tour of Hebron’s Biblical and modern sites can be done in one day. Places to explore and offer prayer include: Cave of the Patriarchs, Abraham’s Well, Tel Rumeida Bronze Age archeological park and army base, the burial place of Biblical Ruth and Yishai (Jesse), Beit Hadassah-with its fascinating and tragic history, museum and 4D ride, the Avraham Avinu neighborhood with its unique synagogue, and the holy grave of Menucha Rachel Schneerson of Slonim.

Cave of the Patriarchs and Matriarchs (Ma’arat HaMachpela in Hebrew) 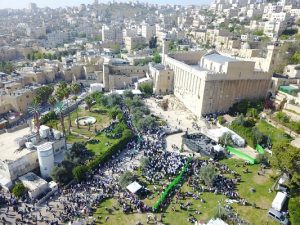 The Cave of the Patriarchs and Matriarchs is the known burial site of the patriarchs, Abraham, Isaac and Jacob, and three of the four matriarchs, Sarah, Rebecca and Leah (Rachel is buried in Bethlehem).

Traditionally, the tomb is also the burial place of Adam and Eve and the area from where all souls enter the Garden of Eden when they pass into the next world. The large structure marks the origins of all three Abrahamic religions: Judaism, Christianity and Islam.

The Cave of the Patriarchs and Matriarchs is dated back 4,000 years – 700 years before the patriarch Abraham set foot in Hebron. Recognized as a holy place by Abraham, the Bible (Genesis 23: 1-20) recounts in detail his purchase of the cave for the grave of his wife, Sarah, and the future patriarchs and matriarchs.

The compound is believed to be the oldest continuously used structure for prayer in the world and is the oldest major building in the world that still fulfills its original function. 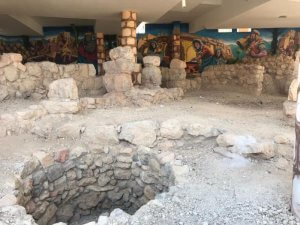 This area, houses the Jewish neighborhood of Admot Yishai (Jesse’s Lands), as well as an IDF army base. Some of the residential apartments are built over important and impressive excavated areas to allow public access to the archaeological layer.

Some of the archeology found that supports Bible narrative are ancient city walls that remain from the Iron Age II (8th-7th century BCE) and are associated with the Kings of Judah and Israel, a cuneiform tablet with a cuneiform script, and 8th century BCE private dwellings, granaries and stamps “for the King” on jar handles.

The archeological park is fascinating and unique as the area has been positively identified with the age of the biblical patriarchs and other biblical events. 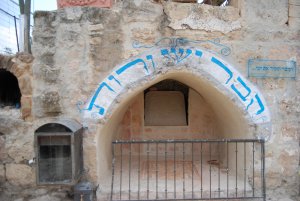 For generations, people have visited the Tomb of Ruth and Jesse to offer prayers. Some archaeologists believe that the ancient site may be connected to King David who established Israel’s first capital in Hebron.

Located in the Admot Yishai / Tel Hebron neighborhood at the top of a hill overlooking a vineyard, the old stone cave-like building houses a small synagogue, prayer room and an alcove with stone artifacts that have yet to be thoroughly excavated. 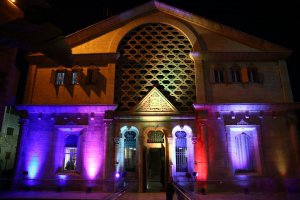 This historic complex in the Old City of Hebron dates back to 1893 and has a fascinating history.

Beit Hadassah was originally called Chesed L’Avraham, (Kindness of Abraham) and was utilized as an infirmary and aid center for the needy. Later, the Hadassah Organization sponsored the first Hadassah medical clinic that granted free medical assistance to both Jewish and Arab residents.

In 1929, Arabs rioted in Hebron, killing 67 Jewish residents. The clinic was looted and burned and Jews were barred from the city.

In 1979, a group of women took the initiative and, along with their children, resettled Beit Hadassah. From their brave actions, Prime Minister Menachem Begin stated at the time, “Hebron is also [part of] Israel. I will not allow for any place Israel to be ‘Judenrein.'”

Today, about 30 Jewish families live in the building, which now includes a synagogue, guesthouse, and an impressive museum with historic photos, beautiful artwork and a 4D movie ride which tells the story of Hebron.

The Avraham Avinu Neighborhood with its Unique Synagogue 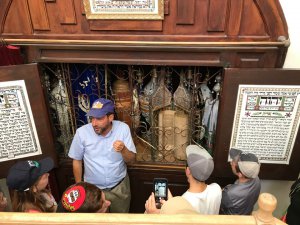 The land for the Avraham Avinu neighborhood was purchased by Jews expelled from Spain during the 16th century who came to Hebron. They built a synagogue that is associated in Jewish lore with a miraculous story:

On the holy day of Yom Kippur, only nine Jews came to pray. Ten are needed in order to hold a full prayer service. An anonymous person suddenly appeared allowing for the recitation of the special prayers of the day. At the end of Yom Kippur, this person mysteriously disappeared. The rabbi dreamed and identified the mysterious visitor as the Biblical patriarch Abraham.

The structure was destroyed by Arabs during the 1929 Hebron uprising. After Jewish settlement was renewed, the synagogue was restored to its ancient glory based on pictures, as well as memories of survivors of the uprisings. Today, it is once again active and used for prayers.

The Holy Grave of Menucha Rachel Schneerson of Slonim
A daughter of Rabbi Dovber Schneuri, the second Rebbe of the Chabad Hasidic dynasty, Menucha Rachel is regarded a matriarch to the Chabad dynasty, as well as Hebron’s Jewish population.

She was renowned among the townspeople, in Israel-at-large, and among Jews and non-Jews alike, for her curative and salvation abilities. She was nicknamed “the grandmother Menucha Rachel.” New brides and barren women would request blessings from her. Every bride who visited the Tomb of Machpelah on the day of her wedding came to get a blessing from Menucha Rachel as well.

Visiting the Holy Grave of Menucha Rachel of Slonim is considered a holy pilgrimage.

Taking a tour Hebron is not only visiting our Biblical ancestors but also those dedicated to maintaining this holy city and its Biblical discoveries for every religion and culture.

Hebron is the root from which all of humanity was born, monotheism was created, and the future arrival of the Messiah sprouts.

Each year, nearly 700,000 tourists visit Hebron. Shouldn’t you be one of them?

To learn more about Hebron Tours, click here. To arrange a tour, please contact [email protected], call +972 52-431-7055 or complete the form at the right and we will contact you as soon as possible.