In Hebron, Purim is celebrated for two days. Here’s why.

Hebron’s ancient walls give it a unique status for the Jewish holiday of Purim. 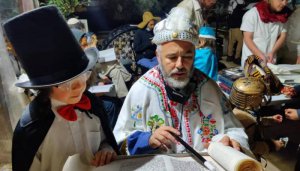 Hebron has the unique distinction of being one of the few cities in the world that celebrates Purim on two days. Jewish communities in walled cities celebrate Purim a day later. This is deriving from the verses in the Scroll of Esther which state, that in the city of Shushan, where the Purim story took place, the holiday was celebrated on the 15th of Adar rather than the 14th like the rest of the Jewish world.

Such is the case with Jerusalem where walls still surround the Old City. However what if there is a doubt about whether or not a city was surrounded by a wall? Those cities, Hebron being one of them, celebrate for two days, and thus have four total readings of the megillah.

Rabbi Yisrael Schlissel of Hebron explained some of the history and halacha behind the celebration.

“There is a safeq (doubt) as to whether Hebron was a walled city at the time of Joshua,” said Rabbi Schlissel, who is head of the Ohr Shlomo kollel, named in memory of his father-in-law Rabbi Shlomo Raanan.

Even if the walls no longer function as a demarcation of the city today, the Jewish sages of the Talmud defined a walled city as whether or not it had a wall at the time of the Biblical leader Joshua.

Thus the megillah, or Scroll of Esther, is read four times, the evening and day readings on the first day and then again on the second day.

“The first day is the main day,” Rabbi Schlissel said, and so Hebron Jews do not recite the introductory blessing upon reading the megillah on the second day.

The tradition of celebrating two days dates back to the time of the Old Yishuv, prior to the Hebron massacre of 1929 which resulted in the eviction of the community. Rabbi Schlissel cited the famous 18th century scholar Chaim Yosef David Azulai (1724 – 1806), known as the CHIDA. He ruled that since it could not be determined whether or not Hebron was a walled city, the holiday shall be celebrated on both the 14th and 15th of Adar with the 14th day being the main day of celebration. The CHIDA’s family was from Hebron and he represented the community in many of his travels abroad.

The modern ruling of two days was issued by Rabbi Dov Lior, the long-time chief rabbi of Hebron and Kiryat Arba and one of the pioneers of the revived community.

Kiryat Arba, a suburb of Hebron built after Hebron was liberated in Israel’s Six Day War of 1967, follows the tradition of its ancient sister-city. Because there is a continuity of buildings and because Hebron is visible from Kiryat Arba, they also celebrate two days of the Jewish holiday.

But how do we know that Kiryat Arba is considered to be connected to Hebron?  “I do my shopping in Kiryat Arba, my kids go to school in Kiryat Arba,” Rabbi Schlissel related. However, electricity and certain other municipal services have for the most part been provided through the Palestinian Authority-run Hebron Municipality, albeit with some challenges. Similar questions have arisen in the past for periphery neighborhoods of Jerusalem such as Ramot.

So where is this ancient wall that gives Hebron its walled status? Right around the corner from where the Schlissel family lives in the Tel Rumeida neighborhood. The Tel Hevron archeological park features ancient mikvot, wine and olive presses and the Cyclopean wall.

The first official archeological excavation was conducted by Prof. Philip Hammond of Princeton Theological Seminary in during the summer months of 1964, 1965 and 1966. It was he who gave the name to the massive Middle Bronze Age walls. Ironically, no Jews lived in Hebron during the Jordanian occupation which lasted from 1948 – 1967, so the uncovering of the walls was irrelevant to what day Purim was celebrated in Hebron.

Other ruins indicate fortifications that researchers believe date back to the Iron Age, giving further evidence of Hebron being a walled city.

Tel Hevron was excavated again in 2014 and 2016 by the Israel Antiquities Authority. Today, the archeological park is open for visitors.

Closer to the Schlissel’s home, a flight of stone steps dating back 4,000 years ago was uncovered in 1999. “But we cannot rely on archeology for halacha,” the rabbi noted.

One reason why Hebron’s walled city status is in doubt according to rabbinic authorities is its designation as a City of Refuge. According to the Torah, one could find asylum in these cities. The Book of Joshua and the Book of Chronicles identifies Hebron as one of the Cities of Refuge. Thus it must have been somehow accessible to those fleeing to it for safety. Were the walls later knocked down? Were the walls arranged in a special way to allow refugees access? Is a walled city that is accessible to refugees still considered a walled city?

“This is one of the main reasons for doubt,” Rabbi Schlissel said, leading Purim to be celebrated on two days as opposed to only the second day as in the case with Jerusalem.

This year is considered Purim Meshulash, which takes place when the holiday occurs on a Shabbat. In this case, all cities, regardless of their walled status, read the megillah on the first evening only. Those cities like Hebron where a second day is celebrated, hold their festive Purim meal on the second day, which this year would be Sunday.

Contemporary Purim traditions in Hebron include the Adeloyada parade on the first day and a Purim carnival for children on the second day.

Because of the COVID-19 pandemic which has affected the world, Purim celebrations will be restricted in order to prevent the spread of the disease. The Ministry of Health is recommending festive meals with immediately family only, and restrictions on the number of participants in synagogues.

Rabbi Schlissel noted that Purim last year was when coronavirus really hit Israel. It was days after the holiday that the country started moving toward full lockdown, when it was discovered that many contracted the virus from parties and social gatherings.

The Jewish Community of Hebron relies on contributions made through The Hebron Fund, as we provide support to families and locally stationed soldiers there. Your generous contributions will be providing a Purim Seudah BBQ for IDF soldiers and food vouchers for families affected by the current situation.