Pioneer of the revived Jewish Community of Hebron has passed at age 83. 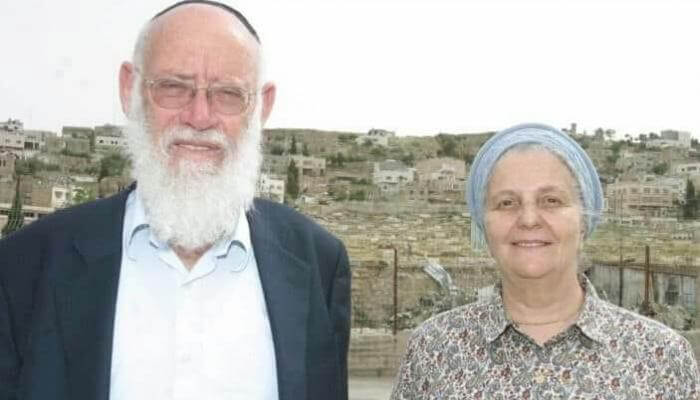 Rabbanit Miriam Levinger, a pioneer in the reestablishment of the Jewish Community of Hebron was laid to rest on September 29, 2020.

The funeral was live streamed on YouTube for the countless people unable to attend due to the COVID-019 pandemic.

Born in 1937 in New York, in the United States of America, Rebbetzin Miriam Beinhorn Levinger immigrated to Israel in 1956. After graduating from college, Miriam attended Shaare Zedek Nursing School. In 1959 she married Rabbi Moshe Levinger, a student of the Mercaz Harav Yeshiva and one of the prominent students of Rabbi Zvi Yehuda Kook. Rabbi Levinger served as the Rabbi of Kibbutz Lavi and later the Rabbi of Moshav Nahalim.

In 1968, she and her husband Rabbi Moshe Levinger organized the Passover seder meal at Hebron’s Park Hotel. This monumental event was attended by many people to commemorate the first Jewish holiday celebrated in Hebron for decades since the Jewish community’s expulsion. It was seen as the ultimate answer to the deadly 1929 Hebron massacre. It set the stage for the eventual repatriation of the entire Judea and Samaria regions which today has over half a million Israeli citizens.

In 1979, Miriam Levinger led a group of women and children in moving into the Beit Hadassah building, thus redeeming this historic Jewish property and paving the way for more redemption of lost real estate in the city and throughout the lost territories of Judea, Samaria, and eastern Jerusalem.

She was laid to rest next to her husband in the ancient Jewish cemetery of Hebron. The funeral was attended by only close family members and select local residents in accordance with the Israeli Ministry of Health regulations to prevent the spread of coronavirus.

Rabbanit Levinger was 83 years old and is survived by 11 children and 50 grandchildren, most of whom live in Judea and Samaria. Her husband Rabbi Moshe Levinger passed in 2015.

Noam Arnon, spokesperson for the Jewish community in Hebron issued a statement saying: “we mourn the passing of Rebbetzin Miriam Levinger, who passed away after Yom Kippur of 5781. She was a symbol and role model of devotion and pioneering, and with her own hands brought about the redemption of the city. Rebbetzin Levinger’s leadership and strength led the community in the heart of Hebron and the historic return of the Jewish people to their first birthplace. Our condolences to her large family, may you be comforted by the rebuilding of our country and the continuation of her endeavors.”

Her son Ephraim stated, “you were always so emotional at the tens of thousands of Jews who came to Hebron on the week when we read the Torah portion of Chayei Sarah. You always said, ‘it is a dream – your father and I dreamed of this happening.’ You were a mother to each and every individual, and to the nation as a whole. You always told me that every single day you thanked God for having merited to raise a generation of upstanding Jews. And I had the merit of being your firstborn son.”

Rabbi Eliezer Waldman, dean of the Nir Yeshiva in Kiryat Arba, and a fellow founding member of the renewed Jewish community said, “Miriam was a fighter. You had to fight for your own Jewish education 80 years ago in the Diaspora when it was hard… but you never gave up on your Jewish faith or your attachment to holiness, to Torah, and to the commandments.”

Malachi Levinger, son, and former head of the Kiryat Arba community council stated, “you were a beacon of faith who taught an entire generation the meaning of true humility and self-sacrifice, as well as what it means to really love the Land of Israel. You were a symbol of the pioneering spirit and with your own hands you brought about the redemption of the City of our Patriarchs. There is no doubt that your deeds will be recorded for all eternity in the annals of the history of the Jewish People in the Land of Israel.”

She was also mourned by Israel’s President Reuven Rivlin who wrote “I am grieved by the passing of Rabbanit Miriam Levinger ז”ל. With the Rav, she devoted herself to the challenge of the Jewish people’s return to Hebron, not as guests or visitors, but coming home. Dear Levinger family, may the building of Hebron and Jerusalem be your consolation.”

Mrs. Levinger was instrumental in the reclaiming of the historic Beit Hadasasah building. She led a group of women who camped out in the abandoned building with their children during the time when the Israeli government was reluctant to support Jewish property rights in the liberated territories.

The building dates back to 1893 when Rabbi Haim Rahamim Yosef Franco established the Chesed L’Avraham clinic, built with funds donated by Jewish communities from North Africa. It was one of the first Hadassah hospital clinics in the country and was staffed and funded by Jewish donations. It served both Jews and Arabs and offered free medical services.

Beit Hadassah was the site of bloody rioting and looting in the 1929 massacre, where pharmacist Ben Zion Gershon and others were tortured and murdered by their neighbors, exhorted by the pro-Nazi Mufti of Jerusalem Haj Amin Husseini. During the Jordanian occupation, the historic building was transformed into an Arab school called Al-Dabboia.

After the liberation of Hebron during the Six Day War of June 1967, the Israel Defense Forces briefly used the old hospital building as a temporary headquarters. When the army moved out, the building was vandalized and everything was removed, including doors and windows.

In July 2020 Mrs. Levinger penned a partial memoir of those days. The following are excerpts:

“A truck was organized to come to Kiryat Arba at three o’clock in the morning to transport us to Beit Hadassah. Yeshiva students from Nir Yeshiva joined to help. We parked in the street behind Beit Hadassah, we all climbed into the courtyard by ladder and entered the building. We gave cookies and oranges to the children and put them to sleep on mattresses on the floor. That was the beginning. Our conditions were terrible. No running water or electricity. We had only chemical toilets and lots of dirt, dust, and mold.

I reminded myself of the original chalutzim [Zionist pioneers] in the 1900’s and realized that we were much better off than them. We slept on mattresses on the floor and the women from Kiryat Arba helped with basic needs, including food and laundry. The army realized after many days that we were not planning on leaving, regardless of our conditions.
Benjamin Ben Eliezer, head officer of Yehuda and Shomron, came and surrounded Beit Hadassah with barbed wire. He warned us that if anyone left, they would not be allowed back in. Supplies were delivered twice a week. Soldiers were placed on the second floor to guard us. They had bathrooms, electricity, and running water. We took electricity from them for a small fridge. We had kerosene lamps, water in jerrycans, and baby bathtubs for washing dishes. Our days were spent preparing meals and occupying the children.”

It was a singular honor to have G-d declare that the women were right. There were elements in the army, police, and Knesset Members who campaigned against us. I was secure in the knowledge that the Jews settled Israel 4000 years ago in obedience to G-d’s command.”

Today Beit Hadassah is a thriving residential complex with a playground and synagogue. A museum and visitor’s center is located on the ground floor.

In June 2019, a special 40th anniversary ceremony took place honoring Mrs. Levinger and the other women who pioneered the return to Beit Hadassah. The official ceremony was attend by then Deputy Minister of Foreign Affairs Tzipi Hotovely, heads of local community council, and the children and grandchildren who make up the new generation of the renewed Hebron and Kiryat Arba communities.