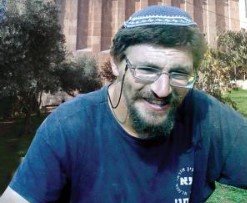 Prime Minister Benyamin Netanyahu started his weekly cabinet meeting on December 30, 2015 with a word of condolence for the family of local gardener Genadi Kaufman. The following is a video with English subtitles released by the Prime Minister’s Office and the full text of his comments.

“At the start of my remarks, I would like to send condolences to the family of Genadi Kaufman. Genadi was the gardener at the Tomb of the Patriarchs [Machpelah Cave]. He as stabbed in a murderous assault several weeks ago. Sadly, he did not recover. This morning as well, I say to all those who would uproot us from the Tomb of the Patriarchs – Except for a few years in the previous century, we have been there for almost 4,000 years, and we will stay there forever. You cannot defeat us.”

Hundreds attended the funeral for Genadi Kaufman, who was buried in the ancient cemetery in Hebron. Genadi was a gardener by profession and lived with his wife and two children in Kiriyat Arba. He was noted for his care in beautifying the community.

Speaking at the funeral, his son David, currently an IDF soldier stated, “Father, you taught me to give everything to the country and to love Hebron. You gave your all for the land and now you get buried in its soil. I promise, we’ll continue your path. We will remain forever in Hebron. That’s what you want.”

41-year-old Genadi Kaufman worked in landscaping and maintenance at the Tomb of Machpela. He made aliyah from the Ukraine approximately 21 years ago. In addition to his wife and son, he leaves behind as 7-year-old daughter.

Kaufman was critically wounded in a terrorist stabbing attack near the Tomb of Machpela on December 7th.

Knesset Speaker Yuli Edelstein noted that only two weeks we personally spent Shabbat in Hebron. He noted the special prayers that were recited in synagogue on Genadi’s behalf. “The enemies know that you can kill one Jew, but you can not kill the people of Israel,” Edelstein stated. “Many tried it, from Pharaoh to Hitler, but they will never succeed. They are lost and gone, but we’ll will persevere.”

Agriculture Minister Uri Ariel stated, “we assure the family of Genadi, Kiryat Arba and the entire people of Israel — we’ll stay here forever. There will be only one state west of the Jordan. The answer to terrorism is to return to all parts of the land of Israel.”

The Tomb of Machpela is the burial site of the Biblical Patriarchs and Matriarchs — Abraham Isaac and Jacob, Sarah, Rebecca and Leah. Thousands of people visit the site from all over the world every year.