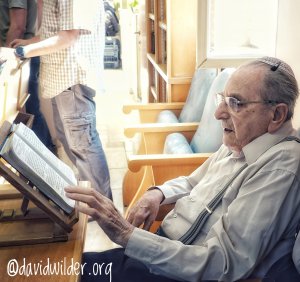 If anyone thought otherwise, Hebron is a very special place. One of the elements that creates such a distinct atmosphere, is, of course the people. There’s such a wide-ranging population that wherever you are in the city, you can always find someone interesting to speak with.
Somewhere in the vicinity of 15 years ago, a new couple moved into Beit Hadassah. Max Volker and his wife Erika had lived in Ashkelon for years, and now moved to Hebron to be near their family, their daughter Ruti and her husband, Rabbi Danny Hizmi.
Over the years Erika became ill. Max cared for her day and night, until she passed away.
This afternoon, at 95 years of age, Max joined his wife and the rest of his family wiped out during the holocaust.
Max’s story, in his own words, (translated from Hebrew by Dr Google) is fascinating. Before leaving you to read it, I’d like to share with you a conversation we had, years ago.
First, by way of introduction, Max survived because of the kindertransport. That is, he was one of the children, given up by his family, and put on a train to life, bringing him to England. In this way many children were saved. But few of them ever saw any of their family again.
We were in my car, talking, when Max told me that he continued to be very troubled. When I asked him why, he said that he didn’t understand how it was, that he, of all his family, was still alive. In other words, he had a guilty conscience because he had lived, and they had died. After all these years, decades, he still pondered the imponderable. Why me, and not them.
Such humility.
The answer though, at least to me, is quite clear. Max refused to give up. He lived for 95 years. He has children, grandchildren and great grandchildren. His family is made up of wonderful people, each of whom has made a contribution to the Jewish people in Israel. Max is/was the quintessential victory over Nazism, antisemitism, evil at its most evil.
Max, despite his age, attended Shabbat prayers in the small Beit Hadassah synagogue. And he participated, was totally ‘with it.’ I sat a few seats from him, and we had a weekly ritual, whereby we would shake hands and offer each other a Shabbat shalom. His handshake was always strong and firm, and I never ceased to be amazed that a 95 year old could have such strength.
A week ago, the handshake was weaker. This Shabbat he was hospitalized. This morning I left Hebron to visit him in Jerusalem. He didn’t look great and his mouth was covered with an oxygen mask. But when I spoke to him he tried to talk back. His mouth moved but he couldn’t speak. I gave him my hand and told him that I would be waiting for him on Shabbat, for his hearty handshake. And he pressed my hand, again and again and again.
I had a feeling that I might not see him again. I told him that we would pray for him and that he should pray for us.
A few hours later he was gone. But I’m sure that he’s doing exactly what I asked him to do: praying for us from the heavens above.
But I’ll miss that handshake, next Shabbat.
Saba Max – Grandpa Max, as he was known to us here in Hebron, was a unique and special person, on the many that has left their mark on Hebron, and on the Jewish people. It was a real privilege to know him.