Biography of founding members of the renewed Jewish Community of Hebron. 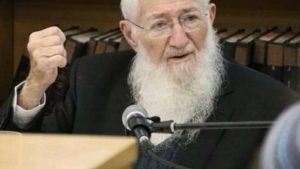 Thousands attended the funeral of 84-year-old community leader Rabbi Eliezer Waldman, co-founder of the Nir Yeshiva and one of the pioneers of the renewed Jewish community of Hebron.

Rabbi Waldman and his wife Ruthi attended the dramatic Passover seder in Hebron at the Park Hotel in 1968 and ever since had been instrumental in the renewal of the Jewish community. There were among the first to move to the newly built Kiryat Arba and became community leaders alongside Rabbi Moshe and Miriam Levinger.

In 1972, Rabbi Waldman, together with Rabbi Levinger, founded the Nir Yeshiva in Kiryat Arba. He headed it for about thirty years alongside Rabbi Dov Lior. Over the years, he served as a rabbi at the Merkaz Harav yeshiva where he studied in his youth, and was a member of the Kiryat Arba municipal committee. He was one of the founders and leaders of Gush Emunim, the movement that sought to repopulate Judea and Samaria after the Six Day War of 1967.

He was a co-founder of the Tehiya party and served as a Member of Knesset from 1984 – 1990 where he was active in the Immigration and Absorption Committee, Education and Culture Committee, and on a special committee for at-risk youth.

To show solidarity with those opposed to the Disengagement of 2005, he temporarily moved with the students of the Nir Yeshiva to the community of Sa-Nur in northern Samaria.

Their son Rabbi Noam Waldman followed in his father’s footsteps to become head of the Nir Yeshiva. At the funeral he praised his father’s dedication to the students stating, “you loved every single Jew with a love that was felt deep within your soul – you were always delighted to greet every Jew and every single Jew felt like your own child.
“The holy yeshiva – our yeshiva – was the work of your life in which you raised up an entire generation of Torah, of faith, of holiness. From the spring of Torah in our yeshiva sprung up a multitude of communities in Judea and Samaria. You loved the yeshiva so much – the studies, the students. When you turned 70, the students celebrated with you – and you, with tears in your eyes, called them ‘my precious sons.’
Another one of the Waldman children, Dudi, stated, “you were not just our father – you were everyone’s father. You were a man of faith and love – and no less than that, and perhaps as a result of that, you were a man of the people, a man beloved to the common man whom you loved. You loved everyone and believed in everyone. So many people passed through your home, people you and our mother supported and encouraged and even adopted. I don’t remember a single period when we didn’t have additional ‘brothers’ living with us.”
EDUCATION AND CAREER
Born in 1937 in Petah Tikva to Rabbi Yoel and Dina Waldman, his family moved to the United States in 1940 where he remained throughout high school and college. He was a student of the revered Rabbi Yitzchak Hutner, long-time head of Yeshiva Rabbi Chaim Berlin in Brooklyn. Rabbi Hutner previously lived in the Land of Israel where he was a student of Rabbi Abraham Isaac Kook and narrowly escaped the Hebron massacre of 1929. This influenced Rabbi Waldman who made rebuilding Hebron is life-long passion and became a student of Rabbi Kook’s son, Rabbi Tzvi Yehuda Kook.
After earning degrees from Yeshiva University and Brooklyn College in philosophy and psychology, Rabbi Waldman returned to Israel where he joined Rabbi Tzvi Yehuda Kook’s core group of students at Merkaz HaRav Yeshiva in Jerusalem. It was there he befriended his lifelong study partner Rabbi Haim Druckman.
Rabbi Druckman mourned his friend at the funeral stating, “today, like every other Sunday, I travelled to Kiryat Arba to learn with Rabbi Waldman, but today I was left alone. Rabbi Waldman was an exceptional person – exceptional in his Torah learning, in his character traits, in his love of his fellow Jew, and in his love of the Land of Israel. He was deeply attached to the Torah of redemption of Rabbi Kook and his son Rabbi Tzvi Yehuda – in fact, he was one of the greatest experts in the teachings of Rabbi Kook. His loss will be sorely felt by the Jewish people.”
PRAISE FROM STUDENTS
Other speakers at the funeral included Rabbi Dov Lior, retired chief rabbi of Kiryat Arba, family, students and friends.
Dr. Noam Arnon, Hebrew-language spokesman for the Jewish community of Hebron remembered his experiences with Rabbi Waldman as a young student at the Nir Yeshiva.
“Inside the soft and endearing exterior was a spine of steel which did not bend, did not surrender and did not fear,” he stated “During the historic Chanukah of 1976, I remember Rabbi Waldman stopping yeshiva studies at the Nir Yeshiva and inviting activist Hanan Porat to speak, and then leading the yeshiva to the heart of Samaria. Afterwards, the entire yeshiva moved to Kedumim, where Garin Elon Moreh was first established. Yeshivat Nir then set out to renew the Jewish community in Hebron… Rabbi Waldman contained inner strength, wrapped in a lot of enlightenment and true love for Israel,” Dr. Arnon said.
NOTES:
* Official Knesset biography of Eliezer Waldman
* Rabbi Eliezer Waldman laid to rest in Kiryat Arba – Israel National News
* Memories of Rabbi Eliezer Waldman zts”l – Israel National News
* Rabbi Eliezer Waldman Ztz’l President of Yeshivat Nir Kiryat Arba Passed Away – Jewish Press
* Rabbi Eliezer Waldman Founder Of Kiryat Arba Yeshiva Passes Away – VIN News
* Senior religious-Zionist settler leader Rabbi Eliezer Waldman dies at 84 – Jpost
This article was originally found here
Menu