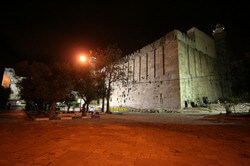 The yearning to enter and pray in the Caves of Machpelah has existed within the Jewish People for centuries. Scores of Jews braved many trials and tribulations in order to reach Hebron. However only a very few were privileged to enter the building covering of the Caves themselves. As is well known, the Arabs prevented Jews from entering this ancient structure, built during the Second Temple Period. Their feeble excuse for forbidding Jews to enter the building was that it is a Mosque. This was in spite of the fact that Islam was founded some 2,500 years after our Patriarch Abraham purchased the Caves and their surrounding field, and 700 years after the Jews built the huge monument covering the Tombs of the Patriarchs and Matriarchs.

There were a handful of Jews who managed to secure entrance into the building after paying substantial bribes to the Arab guards outside the building. However, no one succeeded in gaining entrance into the Caves themselves, deep underground, the Caves of the Patriarchs. Only legend told of those who dared. These were tales of fear. According to them, whoever entered did not return. Only one story exists tells about a Jew who actually succeeded in entering and exiting the Caves is Rabbi Avraham Azuli, known as the “Hesed l’Avraham.” He was ordered by the Turkish Sultan, some three hundred years ago, to descend into the Caves and retrieve his saber which had fallen through a narrow hole into the Caves. A number of the Sultan’s soldiers had been lowered into the Cave, only to die while there, underground. Rabbi Avraham Azuli successfully recovered the Sultan’s sword, thereby preventing actualization of the decree cast against the Jewish population of Hebron.

Obviously, when we returned to Hebron, we had strong yearnings to enter into the Caves of the Machpelah, and there at the tombs of the Patriarchs, to give supplication before the L-rd of our Forefathers. However, most unfortunately, the keys, and with them the responsibility, for this site was given to the Waqf, Muslim fanatics, by the then Minister of Defense, Moshe Dayan. They made every effort to prevent any permanent presence at the Caves. Among other things, they attempted to stop even Jewish worship at the site altogether. They also prevented any possibility of Jews entering the underground tombs.
Moshe Dayan, an amateur archeologist, when realizing the consequences of his action, tried to seek information concerning the underground caverns. (Perhaps he was searching for artifacts to add to his personal collection?!) In any case, any formal or official investigation was impossible. He therefore decided upon an unusual method to quench his curiosity. Within the large hall, called “the Yitzhak Hall” there is a hole in the floor, from which candles are lowered into the cave below. According to prevalent rumors, this was an entrance into the Caves of the Machpelah themselves. However, the diameter of the hole was extremely narrow – 26 centimeters. No adult could possibly fit through this opening, but Dayan found a solution. A 12 year old girl named Michal, young but courageous, agreed to be lowered into the underground room. 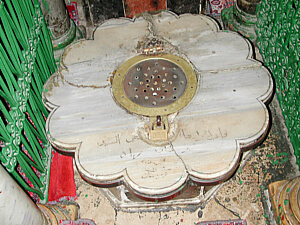 One misty night, Dayan ordered the Muslim guards to leave the building. He told them that they must leave for “reasons of security”. They had no idea what was about to take place. Using the dark night as a cover, Michal was brought to the site. The opening was uncovered and Michal was lowered into the underground room. The spectators were filled with suspense and worry when the girl disappeared from sight.
Michal found herself in a round room, whose floor was covered with coins, candles, and written notes. Looking around, she saw a narrow, dark corridor, to the south. The brave girl entered this hallway and after 17 meters discovered a stairwell. In total darkness she climbed the steps. After 15 steps she found a wall blocking her way. A large stone prevented her from continuing. She tried to move the stone, but to no avail. It wouldn’t budge. Having no other choice, she turned around, descended the stairs, and headed back to the small room via the narrow corridor. There, she was lifted out of the room back into the Yitzhak Hall. She was happily received, and was totally unharmed.

The surprised Dayan wrote out the findings and sketched the underground caves as described by the 12-year-old Michal: a circular room, a corridor, and the stairs. The caves themselves remained a mystery and were not drawn.
A group of us, from Hebron-Kiryat Arba, and in particular the staff of “Midreshet Hebron” were filled with awe at the thought of entering the underground Caves of the Machpelah. Moshe Dayan’s story piqued our curiosity and determination to find a way into the caves. We could not, of course, enter the same way that Michal entered, via the small circular entrance. However, the other side of the corridor caught our attention. She related that she had climbed stairs that were blocked off by a stone. Where could that stone be?
We measured the distance she had spoken of and revealed that the stone was on the other side of the Yitzhak hall, covered by Arab prayer-rugs. The area was always occupied by Arabs. How could we succeed in moving that stone, thereby allowing us to descend into the caves? 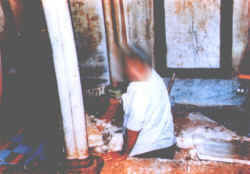 We found the answer during the month of Elul, the month of mercy and repentance, the month preceding Rosh Hashanah. We began saying special prayers of repentance every evening at midnight. The Arab guards, employed by the Waqf, were not overly alert or awake at that time of night. They left their place of work and went to sleep. When we saw this, we brought with us a big chisel to the midnight prayer service. In the middle of the service, we began to sing and dance. During the dancing, some of us made our way to the Arab pray-rugs, lifted them, and revealed the stone. It was held in place by metal bars, attached to surrounding stones. We began hammering on the rock with the chisel, and after a while it began to move. Finally, the stone opened. It is difficult to describe the emotions we felt when we saw the stone move off the small opening under it. We entered, our hearts pounding with excitement. We found stairs that led down into the darkness. We descended slowly. The stairs led to a narrow, dark corridor. We walked slowly through the corridor, stooping down, using flashlights to guide our way. We reached the circular room and looked around. It was round and dark. On the wall were three stones, but no cave was visible. Where was the cave? Were all our efforts in vain?
Several minutes later an additional mystery presented itself. It seemed to us that we felt a breeze. How could this be? Blowing wind originating from above ground? Looking down at the ground we saw several stones that appeared to be stuck, one to the other. The wind seemed to be originating from between them. Within moments, emotions flying, the stones were uplifted and…. the cave – a cave of rock, leading into the earth.

We crawled in a very narrow opening into a circular cave, carved in the stone, deep in the earth. The cave was filled with dust, to its very edge. It was impossible to stand or sit, only to crawl. We continued inside until it widened, and then, a second cave. This cave was smaller than the first, but here awaited us another surprise. It was also filled with dust, but among the dust were bone and remnants of pottery scattered around, some of which were in good condition.
Wind blew in the caves, but the sounds of our hearts pounding was audible. No living being had been this close to the Patriarchs in thousands of years. Each one of us spent some time considering the significance of being in the Caves of the Patriarchs, and of prayer here, adjacent to Abraham, Isaac and Jacob, Sarah, Rebecca, and Leah, and even to the tombs of Adam and Eve, by the entrance to the Garden of Eden, where souls and prayers ascend. Silent prayer, in the presence of our Forefathers.

Following this tremendous spiritual experience, we began to examine the cave itself. The bones captured our attention. Were these the bones of the Patriarchs? We knew that it is written that Righteous ones, even in death, are called living, and that the Patriarchs, called the “slumberers of Hebron” wake and pray for mercy. As we investigated, it became clear that the pottery belonged to the First Temple Era, the Era of the Judean Kings. The Jews of Hebron, and the Jews of all of Judea, understanding the importance and significance of the Caves of the Machpelah, were directed to bring both the bones and the pottery into the underground caves themselves.
This discovery closed an information gap concerning the Caves of the Machpelah, continuing from the days of our Patriarch Ya’akov, the last Forefather buried in the Cave, through to the days of Herod, who built the huge structure above the Cave.
After several hours, as dawn approached, we were forced to leave these sacred caverns, so as not to be caught below. We concluded an unforgettable spiritually uplifting experience. We were privileged to reveal the underground Caves of the Machpelah, to pray there, to reveal ancient Jewish pottery from the Era of the Kingdom of Judea within the Caves, and, even if only for a few moments, united, as Sons with their Fathers. 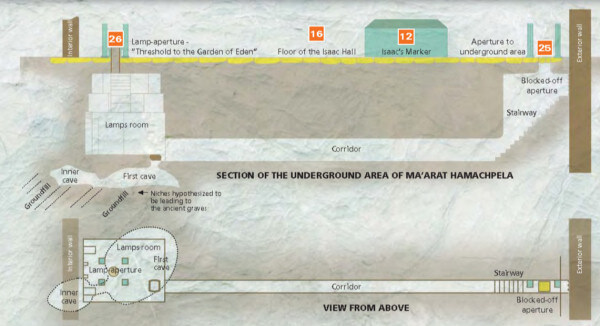