For First Time in 17 Years, Israeli President Visits Hebron in Recognition of Jewish Roots There 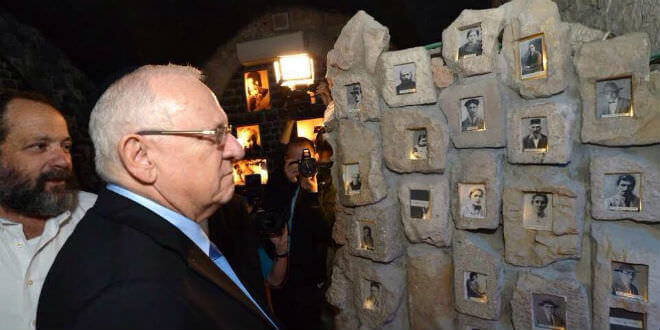 The President of Israel, Reuven Rivlin, made hisfirst official appearancein the Biblical city of Hebron on Monday at the dedication ceremony of the Hebron Heritage Museum.
President Rivlin’s visit was the first by an Israeli president in 17 years since President Ezer Weizman visited in 1998. In addition to Rivlin, other dignitaries that visited Hebron included Chief Rabbi of Israel Dovid Lau and IDF Chief Rabbi Rafie Peretz.

The City of Hebron dedicated a multi-million dollar heritage museum highlighting the Jewish people’s eternal connection to the holy city in the Avraham Avinu (Abraham our Patriarch) building, located in the middle of the Jewish neighborhood of Hebron.

The museum commemorates the victims of the 1929 massacre, in which 67 Jews were killed in an Arab terror attack.

At the museum dedication, President Rivlin described his personal connection with Hebron. Rivlin’s grandparents lived in Hebron before the Arab massacre in 1929.

“This morning I visited my family’s birthplace,” he stated. “I did not fly to Krakow or to Casablanca. I did not need my passport. From visiting my mother, may she rest in peace, Rachel Rivlin on the Mount of Olives in Jerusalem; to the city of my forefathers in Hebron. Where my mother’s family lived and worked – descendants of Chabad Hassidim – of the Rivlin famliy.”

Rivlin went on to quote the Bible in appreciation of the Jewish nation’s deep roots to the ancient city. “Here is where Abraham purchased a burial spot for his wife Sarah, here Joshua sent the spies, here is where King David first established his capital.”

Hebron Fund executive director Rabbi Dan Rosenstein told Breaking Israel News that creating the museum in the Avraham Avinu building, away from the Cave of the Patriarchs, was a conscious decision.

“We specifically wanted to build the Hebron Heritage Museum away from the Cave of the Patriarchs and in the Jewish neighborhood,” he said. “If it weren’t for the idealism and dedication of Hebron’s Jewish families, we wouldn’t be able to visit Ma’arat Hamachpela (Cave of the Patriarchs) and so we wanted to bring more visitors and tourists to the Jewish neighborhood of Hebron.”

In addition to developing the new Heritage Museum, the Hebron Fund raises funds for the improvement of daily life for the Jewish residents of Hebronby building parks and playgrounds, and providing for after-school programs and summer youth activities for Hebron’s Jewish children.

Hebron’s Jewish roots go back to when Abraham purchased a family burial plot. as recorded in Genesis 23. There has been a near continuous Jewish presence in the holy city since then. However, today Hebron’s 700 Jewish residents are surrounded by more than 250,000 Palestinians. It is their bravery and dedication that keeps Judaism’s second holiest city in Jewish hands.

“Every day I come to work at the Cave of the Patriarchs and am harassed by the Arabs here” Hillel Toldsong, a maintenance worker, told Breaking Israel News, “but I am not afraid for I know that God is protecting me and wants the Jewish people to be in Hebron.”

The Hebron Fund’s spokesman David Wilder told the Jerusalem Post that Rivlin’s visit “is a major event” since it marked “another stone of recognition of what Hebron was in the past, what it is today and what it should be in the future as part of the State of Israel.”