How do you make Jerusalem Day real for 5,000 students? How do you bring Jerusalem, the heart of the Jewish people, into the hearts of so many 3-8 graders? 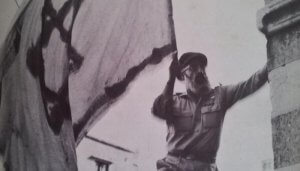 How do you make Yom Yerushalayim real for 5,000 students? How do you bring Yerushalayim, the heart of the Jewish people, into the hearts of so many 3-8 graders? Test your Hebron knowledge HERE!

Rabbi Michael Merrill, Assistant Principal of HANC Elementary School, was seeking just that when initially meeting with Rabbi Dan Rosenstein, Executive Director of the Hebron Fund. Rabbi Yishai Fleisher, the international spokesperson for the city of Hebron, took the students on a meaningful virtual tour bringing to life the events that took place during the Six Day War culminating in the reunification of our sacred and eternal Capital. Yishai walked the children through Yerushalayim using photographs, slides and videos. He explained the history of the city, why reclaiming it was so important to Israel and the Jewish people all over the world, and shared the events that led to this most dramatic moment in Jewish history.

Yishai explained the centrality of Jerusalem to our people, and referenced many moments in history when important events occurred there. He spoke of our Forefather Abraham and the binding of Isaac, Kings David and Solomon, and how Jerusalem became the spiritual capital of not only the Jewish people but for other religions as well. For 2,000 years, Jerusalem was taken from the Jewish people and while there was always a Jewish presence in the city, it was not under Jewish control and the Jews were prevented from praying at our holy sites there. This all changed in 1967, when the Egyptians attacked Israel and in six short days, the clever and powerful Israeli army, along with Hashem’s help, defeated the Arab armies and reconquered Jerusalem.  Through a series of photographs from those fateful days, the students were able to truly feel that they were living through the moment, seeing the expressions on the soldiers faces as they looked at the city from Mount of Olives, as they walked up to the Western Wall, and as they stood there looking up at the wall for the first time.

Another holy city that was liberated and reclaimed the next day was the city of Hebron. Even its name has the word “friend” and “connection” embedded in it. As Yishai explained, Jerusalem and Hebron are connected and very precious for our people.  Hebron is where King David was born and ruled initially, it is the place where most of our Forefathers and Foremothers were buried, and thereby maintains a very strong connection to our history and people. The liberation of Hebron took place the day after Jerusalem was reclaimed. One important figure that played an iconic role in this war was Rav Shlomo Goren. Not only was he a learned Rabbi and Torah scholar, but he was also a General in the Israeli army. After liberating Jerusalem and recapturing Temple Mount and the Western Wall, he realized that more was needed. The next morning, Rav Goren took a jeep to Hebron and when he arrived, he expected the Israeli Army to be there. He and his driver were surprised to discover that there were no Israeli soldiers in Hebron. Since the Arab residents were shell shocked from the events of the past few days, they hung white sheets out of their windows as a sign of surrender. Rav Goren continued further to liberate the city and the Ma’arat HaMachpela, and upon his arrival, he hung a makeshift Israeli flag on the front of the building.  For the first time in 700 years, a Jew walked inside the Maarah and was able to pray inside at the graves of our matriarchs and patriarchs who are buried there. This led to much celebration, including the celebration of six weddings right outside the Maarah, which were performed underneath a chuppah that was held up by the barrels of four tanks.  In this way, he explained, the Israelis were turning canons, a symbol of war, into a place of love.

This meaningful program achieved its goal of uniting Jewish children from across the ocean with our beloved Israel on Jerusalem Day. In addition to HANC, other New York yeshivot joined in the program which included HAFTR, HALB, Shulamith, YCQ, North Shore Hebrew Academy, Derech haTorah and Har Torah. In addition to the New York schools, yeshivot from New Jersey such as Yeshivat Noam, YNJ, JEC and Moriah joined the program, as well as the Hillel Torah in Chicago and the Brauser Maimonides Academy in Ft. Lauderdale. A total of fifteen yeshivot and close to 5,000 students logged on to participate in the program.  Yishai invited each and every child to come to Israel and visit Hebron with their families.

Following the presentation, each school participated in a school-wide Kahoot! game (test your skills here), which reviewed the information that they learned about Jerusalem and Hebron during the event. This interactive game provided a fun way for the children to exhibit what they had learned during this moving, informative event that brought to life this important moment in Jewish history. Each student received an ‘I Love Hebron’ wristband and a postcard they can write to an Israeli soldier. The impact of this powerful experience will remain with the children for a long time to come. Hope to see everyone visiting Jerusalem and Hebron really soon.