Unity Between Heaven and Earth 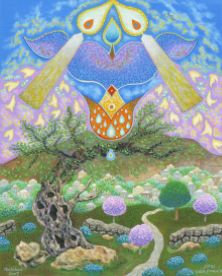 At the center of this painting, we see that there are 21 Drops inside an orange flower, 10 Drops on each side right and left, and one drop in the middle. There is also a 22nd drop outside and underneath the flower. According to the Kabbalists, the color orange is associated with the sefira “yesod/Foundation” which is involved with the unity between heaven and earth, as we say in our “pesukei dezimra” “ki kol [everything – a term associated with “yesod”] bashamayim uva’aretz [“heaven and earth].” Indeed we see this orange flower exactly at the adjoining between heaven and earth in the painting. Our Sages correlate heaven and earth to masculine and feminine aspects, respectively. Indeed they also see drops of rain or dew as a type of connection between heaven and earth, which beautifully explains why these drops are seen at the “bridge” between heaven and earth in this painting. The significance of these numbers seems to be associated with a Kabbalistic teaching that ties God’s Name “Ehyeh”, whose numerical value is 21, as the spiritual source of the Hebrew alphabet of 22 letters [a fuller discussion of this matter is outside the scope of this piece]. The letters of the alphabet are called “otiot”, as they act as “otot”= “signs”, i.e acting as “signs” of heavenly messages that are signaled and “bridged” to the earthly level.
The dualism and unity between masculine and feminine can be seen not only on a heavenly-earthly vertical scale here but also on a horizontal scale as well. the path below distinguishes between 5 Shrubs on the right side to 5 on the left side, a matter that seems to hint at five aspects of kindness Kabbalistically associated with the masculine, and five aspects of judgment associated with the feminine. We also see the two candles of Shabbat representing masculine and feminine enjoined at the top of the painting. There are also nine “celestial leaves” to the right, and nine to the left, a matter described by the Kabbalists as “nine straight (yashar) – masculine -lights and nine returning -feminine – lights,” altogether eighteen, a matter that they tie to the eighteen blessings of “birkot hashachar” and also the eighteen verses of “vayehii kavod” in pesukei dezimra.
Nachshon tied this painting to parshat Kedoshim, a parsha that emphasizes time and again how heaven and earth are integrally connected, and how our earthly conduct has deep heavenly consequences. “You shall be holy” – on an earthly level – “for I Hashem Your God am holy” – on a heavenly level.
We also see 3 Purple trees, as the number three is associated with unity according to the Maharal, and also these trees may hint at the three Patriarchs of Hebron, which is of course a symbol of unity as Hebron itself means “unity-hibur”!