The Dangers of Controversy 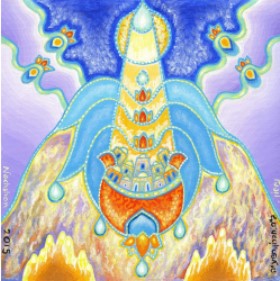 This parsha discusses the great dangers of controversy. In this painting we see two fire-like parties as if divided [fire is associated with controversy and also the attribute of judgment], perhaps in controversy, but yet a bluish water-like figure as if sending its wings to encompass these parties to unite them with the waters of compassion and mercy that bring unity even at times of controversy. We see seven drops of water, while two of them are seen above the other five. This may hint at a Kabbalistic teaching that discusses the “five aspects of kindness” that are considered to originate in two stages before them called “shoresh” and “anaf,” i.e., “source” and “stem.” There are six blue wings, and a seventh aspect is the same color forming the “gate” in the center. The Kabbalists indeed describe a seventh aspect called Malchut acting as a type of “gate” toward another six aspects above it. We see four encompassing angels with red/orange crowns and three more internal angels, with the same types of crowns, with the fore-mentioned blue wings [their “faces” are not seen]. Then we see ten houses in the same color as the angels and their crowns. Indeed, the Kabbalists discuss four aspects that “encompass over the encompassment,” three aspects that encompass more internally, and another nine/ten aspects that are “internal “ aspects.  The Kabbalists call these aspects “Tzelem” which literally means “image” as in the verse saying that man was created in the “image of God.” This matter may hint in this painting that one of the more essential ways of building unity in cases of controversy is seeing the “image of God” and the soul level of all, thus tying all to the Divine light [also hinted to in the painting], and ultimately to the One God Who unites all.

Hebron, the City of Unity – “hibur” – of course, is a source of Divine light that unites all through the Holy Presence that rests here and through the angelic figures of our Patriarchs and Matriarchs, our common roots, who instilled us with their attributes of kindness and mercy and realization of the “image of God” in our counterparts.