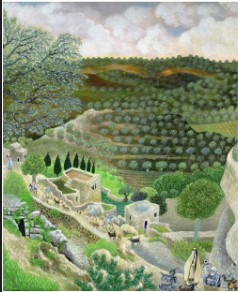 “What R’ Nachshon wrote next to this painting, ” come out of yourself completely, ” may hint at a person’s nullification towards the Almighty, thereby becoming a pure vessel to bring God’s blessing to Israel. By becoming such a vessel one may merit to tap into the light of The holiest of all countries, the Land of Israel, which is capable of bringing holiness to the whole world, and especially by going to it – “Lech Lecha.”.”
Seems there are 12 sheep corresponding to the 12 tribes who are like “sheep” before their leading shepherds, our holy forefathers of Hebron, so this may be why you see three figures upon camels, called “gamal” in Hebrew, which also means to enact kindness, and indeed the Forefathers are associated with kindness as is written “and He remembers the kindness of the Forefathers” . The six goats, each bearing two horns on their heads, may hint to the six heads of months, “roshei hodashim” of the winter and the six heads of months of the summer in which a goat is offered in the Musaf offering
” The fathers with the light -colored camels may hint to wisdom, while the woman next to them may hint at a fourth aspect called by the Kabbalists “malchut” / kingdom as they consider a “fourth” female aspect as coming after three “masculine” aspects. This woman carries fruits, and indeed, fruits hint at the female aspect, considered to “reveal” and bring fruition to matters that were previously hidden. The stripes on her clothing also imply the leadership – “kingship” – as is seen in Joseph, who is given a striped garment by his father to signify his importance..
The old man seems to be Eliezer, the servant of Abraham, who is seen in a subservient manner sitting under Avraham, and there is a bucket next to him perhaps hinting to what said about Eliezer – that he would teach the teachings of his master Avraham like a bucket takes water out of a well.