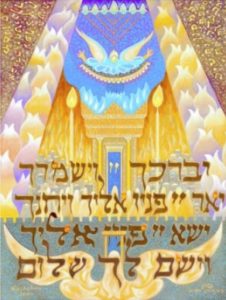 The Priestly Blessing, found at the center of this painting, has its primary usage in the Holy Temple, as is found in the context of this parsha, adjacent to the inauguration of the Mishkan, forerunner of the Temple. Also the Rambam, in his enumeration of the mitzvot, places this Priestly Blessing amidst many other mitzvot that pertain to the Temple, even though in practice, he rules that the Priestly Blessing is to be said in every congregation. This matter explains perhaps why Nachshon placed this Blessing amidst the Temple scene here.
A wall made of fire flames is seen here as Hashem told the prophet Zecharia (2, 9) “I shall be for it [Jerusalem] a wall of fire” Also, the Holy Presence, found in the Temple, is described in the Torah as a “consuming fire.”
“Becha yevarech Yisrael” (Breshit 48, 20) – “by you shall Israel be blessed,” as said by Yakov in the context of his blessing Efraim and Menasheh, carries parallelism to the priestly blessing of this parsha. Indeed, the custom is to bless children every Shabbat with the priestly blessing along with the blessing of Yakov to Efraim and Menasheh. Kabbalists note that the Hebrew word for “by you” is “becha” which has the numerical value of 22, a matter that hints at a blessing by all the 22 letters of the Hebrew alphabet. This matter may explain why seen here at the sides of the painting, are letters of the Hebrew alphabet.
As we just mentioned, it is customary to bless children on Shabbat. This may be the reason why we see the two candles in this painting, which are an obvious reference to the two candles lit on the eve of Shabbat. Shabbat itself is also a symbol of peace, a central theme of the Priestly Blessing. We see people and apparently, their houses through which they settle in Jerusalem/the Holy Land within the walls of the Temple, apparently drawing a connection between the “peace,” i.e., connection of Israel with the Holy Land identified with Zion to Zion the Temple/Jerusalem and also with the candle lights of Shabbat “if you keep the lights of Shabbat I will show you the light of Zion.”
We see angelic figures at the opening of the wall at the bottom of the painting and also on top of the painting in the form of a priest with outstretched hands blessing Israel. This may hint at what our Sages teach “just as you [the priest] bless below, so too I [God] shall bless above.” We see the Menora, considered a symbol of the Kohanic rite, just above this figure (also note that Kabbalists note two customs for lighting Shabbat candles, one to light two candles and another to light seven candles like the Menora.). This figure seems as if to emerge from the petals of a flower. Indeed, the Torah describes the Menora as having “flowers and blossoms.”
Hebron is called in the book “Sha’ar Hahatzer” as the Crown of Peace. Indeed, this city strengthens our common Patriarchal roots and brings unity – “hibur” – and peace amongst all of Israel.