A new report analyzes four artifacts uncovered from inside the Cave of Machpela. 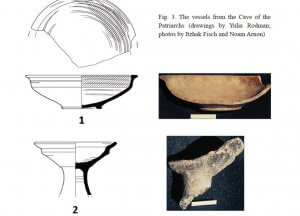 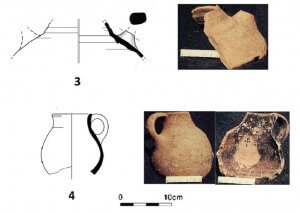 Ancient pottery found in the Cave of Machpela sat for 39 years until it was finally analyzed in a study released this month.

The research indicates the Cave of Machpela, ancient burial site of the Biblical matriarchs and patriarchs was a pilgrimage site in the First Temple Era.

It was in 1981 that a small team from Midreshet Hebron college in Kiryat Arba became the first people to descend into a stairwell in the Cave of Machpela in modern times.

Their descend was preceded in 1968 when the holy site, recently liberated in the Six-Day War less than a year earlier, became accessible. This exploration was conducted through the visible entrance inside the complex.

The unofficial 1981 excavation was conducted through the hidden entrance. The team pried open the concrete slab that covered the stairwell. Inside they found human bones and pottery.

One of the participants of that daring exploration was Hebron resident Noam Arnon, co-author of the new report and author of several books on the city. A full article on the 1981 exploration can be found here.

Along with Hans Mommsen of Bonn University in Germany, and David Ben-Shlomo of Ariel University, the three published “Iron Age Pottery from the Cave of the Patriarchs at Hebron” which was printed in the latest edition of Israel Exploration Journal, volume 70 number 1, 2020.

Prof. Ben-Shlomo spoke to The Jerusalem Post about the research on the four items recovered from inside the cave — bowl, a chalice, a jug, and a jar.

“The pottery dates back to around the 8th century BCE, which brings us much closer to the tradition of the story about the cave presented in the Bible,” he stated.

The items underwent several compositional analyses. Petrography was able to determine the age and origin. The types of clay used in the pottery did not come from the Hebron region, but from other locations, indicating they were brought to the site from other cities.

“We can infer that people came to visit it from different locations,” Prof. Ben-Shlomo told The Post. “Moreover, a question stands about whether new people continued to be buried there. However, there seems to be a continuation of considering this place as a holy place, as a pilgrimage site, visited from different parts of the country.”

Since 1981, the items have been stored in the Museum of the Land of Judah in Kiryat Arba.

The report explained that “while no archaeological excavation was ever carried in the Cave of the Patriarchs, the vessels collected from the cave are of clear importance. These are the only vessels found in the cave that have been published in detail and analyzed so far. Furthermore, these Iron II vessels indicate that the cave was used, probably as a burial location, during this period. Thus, the vessels may bridge the 1,600-year gap between the possible carving of the cave during the Middle Bronze Age and the construction of the monumental structure in the Early Roman period.”

Continuing, the report stated, “notably, the cave is not mentioned in any historical texts dating from the period gap. This evidence joins the archaeological evidence from Iron II strata at Tel Hebron nearby indicating that Hebron was an important city in Judah during the Iron Age.”

In the Second Temple Era, King Herod the Great constructed the massive edifice over the cave which stands today to serve as a memorial for Abraham, Isaac and Jacob, Sarah, Rebecca, and Leah.

The two entrances to the cave are located in the Hall of Isaac and Rebecca. Today, the visible entrance is a small hole in the floor in which candles are lowered daily. The hidden entrance , where the pottery was discovered has been sealed up and is usually covered by rugs.

Prof. Ben-Shlomo added he hoped more analysis of the items would be conducted in the future.

(This article was originally published here)