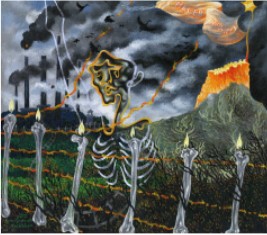 In this painting, we see six columns from the concentration camps, six lines of fire, a six-point star of Jude, six ribs on each side like the twelve tribes, six bones standing, and in the center of them, a seventh aspect – the man’s skeleton – likening the middle light at the center of the menorah, of which it is said that it was not extinguished and lasted everlastingly – this represents Israel’s power, the eternal people, to surpassing everything. Also, this skeleton is raising his hands, hinting to how Moshe Rabeinu raised his hands in the battle against Amalek – associated with the Germans (Nazis) according to tradition (see note below). R. Nachshon related this to the words of this parasha that evil will come upon Israel at the end of days when they scorn “niatzuni” God – a term closely resembling the word “Nazi.” It is also possible to connect these words to the verse “And all those who scorn me “vechol mena’atzai” will not see it [the Land of Israel],” which is said in the context of the sin of the spies, and it is known that from the sin of the spies mourning was set for generations and the Holocaust is also included in this.
In the painting, Israel is represented by the Jude star and the yellow/orange fire on the right with a colorful peacock that has all the colors. The peacock perhaps symbolizes Israel, who include all the Divine “colors” calling on high, versus the black “colorless” evil ravens that represent the other nations, enemies of Israel. Also, “never again!” (in English) is written on a tallit in the color of fire, which symbolizes Israel in the painting.
Hebron – the eternal Jewish city – is not only a testimony to Israel’s unceasing survival throughout the generations, including the Holocaust but also a testimony to the revival of the “dry bones” in Ezekiel’s vision of turning destruction “Hurban” into Hebron (same letters) that unites our people. Ascension of souls to our renewed holy land ultimately God does in the miracle “He brings a soul to the people on it [the Holy Land]” (Isaiah 32:5), which is understood by our sages to mean that the resurrection of the dead will take place in the Holy Land.
Notes regarding the identification of Germany (Nazis) with Amalek in Jewish tradition:
One of the things that quickly come to mind when discussing the existence of an Amalek revival today and its identity today with Germany (Nazis) in light of the recent history filled with rivers of blood that we have with this nation, so the question was asked, does this logical attribution have a basis in our sources? In the Gemara Megila (6, 1):
Rabbi Yitzchak said: May it be written (Psalms 10:9) ” Oh God, let not the evil of his plan let him lift a basket.” Jacob said before the Holy One, blessed be He: Lord of the world, “Do not give ” to the wicked man the lust of his heart, “Do not give up his anger, “this is the curse of Edom, without whom they come out to destroy the whole world. The Talmud recounts that it is specifically “Germiya of Edom” involved with this.
Rashi interprets the word ” germiya ” as: “the name of the kingdom and existence of Edom” and wrote in the innovations of Rabbi Ya’akov Emdin: ” Likewise, Germany (Nazis) is our Ashkenaz”, as well as the Gaon of Vilna in his glosses on the Gemara in Yoma (10:1): “The sons of Yaphte Gomer and Magog and Medi and Yon and Tobal and Meskh and Tirs Gomer is Germiya – R. Lagermania . It appears from these sources that the German nation is mentioned negatively already in the Gemara period. Another thing that indicates an unusual negative attitude towards the German nation is its attribution to the seed of Amalek, as stated in the book “Adar and Purim” (page 64 Note d) which he brought from the book “The Man on the Wall” (8 on page 108) which tells how Rabbi Yosef Zonfeld ZTL did not go out to meet the German Emperor Wilhelm when he arrived in Jerusalem because the Mahar’il Deskin had a tradition from the Vilna Gaon that the German nation came out of Amalek and this is the sign of the seed of Amalek: boasting and beautifying on the outside, and inside them poison and hatred for the people of Israel, and adds that they cannot be trusted. Nevertheless, it should be noted that these sources cannot be taken into Halachic practice regarding the commandment to obliterate Amalek, especially since many nations have intervened within this nation.