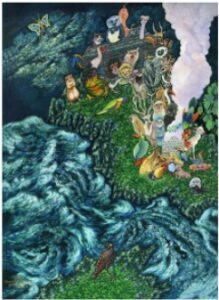 In the painting we see the four types of matter according to the Kabbalists: non-living/”solid” matter, vegetation, animals, and human, which they say allude to the four letters of the name Havaya. Vegetation alludes to ” Vav in the Name Havaya, a letter they associate with a concept called “the Renewing Mah” (Mah Hahadash), associated with all renewal. Of the category of vegetation, in this painting, we see the olive branch taken by the dove as mentioned in this parsha. The olive branch here has seven leaves, which may hint at a Kabbalistic concept called the “seven kings” which represent aspects that were once destroyed but are renewed by an “eighth concept” identified with “the Renewing Mah” we mentioned above. Indeed, this “eighth concept” may be identified with the eight buds we see here on the olive branch, and indeed a bud hints at a renewal in nature.
The raven is mentioned in this parsha as going back and forth, implying that it did not find resting ground yet after the Flood, also implying that the attribute of judgment tied to the Flood was still strong. Indeed, our Sages attach the raven to an attribute of judgment, and sometimes even cruelty. With different vowels “orev”/raven becomes “erev” meaning evening, also considered a time of judgment Kabbalistically. According to the Arizal the letters for raven are ayin, resh, and bet, which have a numerical value associated with an attribute of judgment also found at a time of famine which has the same letters in a different order “ra’av.” This may explain why in the painting we see that the raven is left alone without his partner, since according to the Arizal the ability to unite male and female comes from the attribute of kindness, and this is lacking by the raven, especially at the time of the great judgment of the Flood. Therefore, we see the raven crying in the painting, on the other side of the land separate from Noah and the other animals. Note also that the “other side” in Hebrew is also “ever” the same letters as “orev”/raven.
Versus the raven is Noah offering a sacrifice on the altar as is mentioned in the Torah and the other animals with the colorful dove, which resembles the rainbow, all symbols of renewal coming from Hashem’s compassion and kindness upon the world. Also Hebron today is a symbol of Israel’s eternal and renewed connection to the Holy Land!