The Splitting of the Red Sea 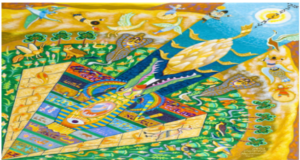 In this painting, we see a depiction of Pharaoh’s chase after Israel, depicted as people enrobed in taleisim within a yellowish “flame,” surrounded by shofars, into the Red Sea. It is clear that they are directed/”goaled” towards the Ten Commandments beginning with the word “Anochi” with the ten first letters of the alphabet following hinting to these ten commandments. The Ten Commandments were given at the Giving of the Torah at Mount Sinai, described by Hashem as being one of the goals of the Exodus “you shall serve God upon this [Sinai] Mountain.” It seems that the reason the shofarot encircle the People of Israel in their crossing the Sea towards freedom is due to the shofarot symbolizing freedom as they are called the “horns of Jubilee” and also sounded on the Jubilee year when slaves are freed. The seven shofarot seem to hint to the seven shofarot used at the miraculous fall of Jericho when it became apparent before all that “the Land belongs to Hashem,” a major theme of the “Divinely emancipating” Jubilee year.
On the other side of the painting, we see the one-eyed beastly figure of Pharaoh, also depicted as a crocodile chasing after Israel. It could be that the one-eye theme represents how Pharaoh does not have the proper perspective, as two eyes give proper perspective in sight, but rather is wildly chasing after Israel as Hashem hardened his heart, in a way not normally feasible, to the extent that he pursued the chasing of Israel, to whom so many miracles were already conducted in Egypt. It seems that Nachshon also wished to convey the “madness” of Pharaoh when chasing Israel after these miracles in Egypt, i.e., the ten plagues, by placing Pharaoh in the midst of a pyramid of the plagues on the rows of the pyramid. We see that the first plague is at the tip of the pyramid while the last is at the widest part of the pyramid, apparently to convey that at first the plague of blood was the most tolerable, but then as the plagues progressed, they “widened” till they were not tolerable at all. In regard to the Pharaoh’s image as a crocodile, in Ezekiel 29, 3, Pharaoh is indeed depicted as a “monstrous crocodile crouching in the Nile,” and this image is quite for certain Nachshon’s intention in Pharaoh’s chase after Israel in this painting. There are many more matters to discuss about this painting, but we will have to suffice with this for now.
The theme of freedom/shofars we discussed in this painting is also a major theme of Hebron, Israel’s home-city in the Holy Land and cradle of King David’s sovereignty in the this Land. Therefore, not surprising is the Tikunei Zohar’s messianic vision: “At that time (the “end of days”) the three Patriarchs will adjoin with might, and Truah, Shvarim, Tkiah will be sounded, and with them, the “the earth shall shake” and this will be in the “end of days,” and all these miracles will be in the Land of Israel, for there is Hebron where the Patriarchs are buried.”(Tikunei Zohar 13, 28b)