When You Count the People of Israel… A Donation Unto Hashem 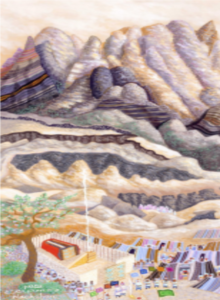 In this painting, we see the tribes of Israel encamped adjacent to the Mishkan. At the Mishkan’s entrance, we apparently see the leaders/princes of these tribes holding variously colored banners, representing the various tribes. In parshat Behaalotcha, we indeed learn about the princes gathering at the entrance of the Mishkan, and in parshat Bamidbar, we learn how the tribes had “banners.”

In the background, we see the multitudes of Israel, also found in tents surrounding the Mishkan. It should also be noticed that all the people and the tents are painted in either white, brown, red, blue, purple, or black/grey. It seems that Nachshon may have wished to convey how also the People and their tents do not only put the Mishkan as their physical and spiritual center, but also their very “coloring/nature” is integrally associated with the Mishkan since all of these colors were used in the Mishkan: white in “shesh”/linen or in silver, brown/ish in gold/copper or the internal side of the animal skins used, red in “scarlet wool/tola’at shani,” blue in “techelet,” purple in “argaman”, or black/grey in the goat skins – “izim” – used. It seems that this matter reflects the idea mentioned in this parsha that the donation towards the Mishkan should also be taken in the context of a census and atonement for the People, implying this integral connection between the People and the Mishkan. Moreover, it seems that Nachshon may have wanted to emphasize the connection of the People’s personal tents with the “Tent of Assembly,” the Mishkan, to which all the People and leaders assemble, as seen in the painting. The personal tents represent the personal homes and families of Israel, which all resemble the Great “Tent of Assembly,” the Mishkan, for, through the Jewish home, the Holy Presence rests, as our Sages have taught, in some similarity to the Mishkan.

As we noted in parshat Teruma, we see the Mishkan as if illuminated with brilliant white light amidst a very black and dark background. Indeed, from a Kabbalistic viewpoint, the Mishkan is the place of the Holy Presence, the focal point of Divine “light” upon earth, and white is associated with holiness as well. Yet, the Kabbalists teach that the Wilderness, within which the Mishkan was erected, is considered a focal point of the evil forces. Therefore, the darkness of the Wilderness in the painting apparently depicts darkness from spiritual light. However, surprisingly in this painting, we see the wilderness “taking on” the same colors and stripes we saw in the tents of Israel. This fascinating matter may reflect the Kabbalistic teaching that the soul, its body, the body’s garments, a tent [considered an intermediary between clothing and housing/home-location],  and the location where the body lives are all integrally connected. Therefore, it seems that Nachson shows us that, through Israel’s spiritual work in the Wilderness, their Wilderness location itself showed signs of this holy influence, “resembling” the People’s tents which they themselves resemble the Holy Mishkan, the source of this holiness.

Hebron, where Nachshon painted, also represents these connections as the City of Connection – “hibur” – flowing its influence of the Holy, for here is a focal point of the Holy Presence, inspiring all, even those found in the darkest “Wilderness”, with its brilliant light.