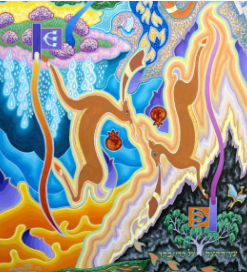 A primary theme of this parsha is purification, whether from the leprosy or from defilement in regard to various bodily emissions. Kabbalisitcally, purification is involved with raising “spiritual sparks” from the abyss of evil, associated with aspects of death, impurity and to a certain extent also evil, towards life, purity, and sanctity. Similarly, in this painting we see themes of raising sparks/leaves/drops from the dark abyss of the Tree of Knowledge towards the goodness of the Tree of Life.
From the mouth of the upper deer, whose face is towards the heavens, come 13 Leaves , and from the shofar of the lower deer, whose face is towards the earth, come 7 Leaves. It seems that these two deers correspond to the masculine and feminine, which are associated by the Kabbalists to heaven and earth respectively. The number thirteen is associated both to the age of bar mitzva for a young man and also has a connection to the thirteen attributes of mercy, a trait more associated to the masculine by the Kabbalists, while they associate the trait of judgment to the feminine. The feminine deer is associated with seven, as we have discussed before that the number seven is associated with the feminine as can be see in the names Bat-Sheva (“daughter of seven”) and Eli-Sheva used for women. (Also see roundings of tzitzit by techelet, as our Sages mandated that they should be no less than seven but no more than thirteen…)
In this painting we also see five groups of 7 Drops. This seems to hint to a profound Kabbalistic secret which deals with a concept called the five « partzufim” which are considered to be “built” so-to-speak out of the seven feminine aspects we just discussed (a proper discussion of these concepts is out of the scope of our discussion/commentary on the painting).
Nevertheless, there are Seven Purple shrubs are seen near the Tree of Life seen in the upper “heavenly” side of the painting, since as we just hinted the feminine aspect of seven is also an important “building block” of the heavenly spheres. However, we see that the lower seven leaves are adjacent to the Tree of Knowledge found in darkness, associated by the Zohar to the powers of evil, associated with division and parting. This seems to be the meaning of “Harei Bater,” found next to the Tree of Knowledge, which mean the “mountains of division.” Versus this, at the top of the painting next to the Tree of Life we see “Harei Besamim” (both terms for mountains are taken from Shir Hashirim) – the mountains of incense, associated with the Holy Presence, as the Zohar describes matters of holiness as “smelling a sweet fragrance.” Indeed, the Zohar identify the “field [of fragrance] that Hashem has blessed”, as mentioned by our Patriarch Yitzhak, with the holy Field of Machpela in Hebron.
Corresponding to this comparison between the Tree of Life and the Treee of Knowledge we see that there is a bird facing downwards towards the Tree of Knowledge and there is another blue bird whose face is happily facing upwards to the Tree of Life.
There is much more to discuss about this painting, such as the figure enrobed in white with the shofar, but we must suffice with this for now…