And The Kohen Shall See Him 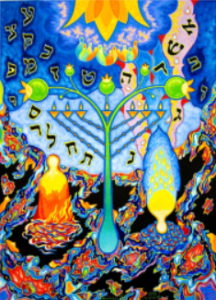 A primary theme of this parsha is leprosy. Our Sages taught that one of the main reasons that leprosy mentioned in the Torah comes about is due to lashon hara. In this painting we see an emphasis on the power of letters and words, the building blocks of speech. Top-of-center there are figures of people in different shades hinting to different types of people, but yet they are grouped together, showing that they are unified together through the positive usage of communication that connects people. We see 12 such figures hinting to 12 Tribes of all Israel united as one.
However, below we see all the shades that are above in these central figures as if dissolving in the darkness and blackness and appearing as if they are burning destructive fires, hinting at the divisive and destructive power that can be in these same letters and words of speech, especially in lashon hara. Among all these flames we see a figure as if being burned, as our Sages taught that lashon hara is detrimental to three figures, the one who says it the one who listens to it and the one that the lashon hara is said about.
In contrast to all these negative forces, and placed exactly parallel to this “burning” figure, there is the power of the Kohen, the man of kindness according to the Kaballah, depicted in this painting as a great drop of water, also a symbol of kindness according to the Kabbalists, of azure color, who enters into all this evil and corrects it. Therefore, this figure is depicted as a yellow/briliant lamp raising yellow/brilliant sparks of holiness from this dark abyss of evil, hinting to his spiritual power to increase kindness, the source of curing evil thought and speech between people. Indeed the Kohen acts in this parsha as the curer of the leprosy, and according to the Arizal this is due to the Kohen’s power of kindness.
We also see the Menora acting in a similar way to the Kohen among the dark abyss. The Menora is both a symbol of this priesthood lit by the priests and seen as a special gift and Symbol of priesthood, as can be seen by our Sages’ commentary on the beginning of parshat Baahalotcha which describes Aharon the Priest’s lighting of the Menora. Next to this Menora we see olives, considered a symbol of peace, as Noah’s dove brought a branch of olives at the cessation of the Flood, a sign of Hashem’s “peace” with earth, I.e the end of the destructive Flood.
Of course, Hebron which means unity – “hibur” – is a source of uniting all the tribes of Israel who find their common Patriarchal roots here. This city is also the leading Kohanic city in the book of Yehoshua, as it is also a symbol of Kohanic kindness – “vezocher hasdei avot!”