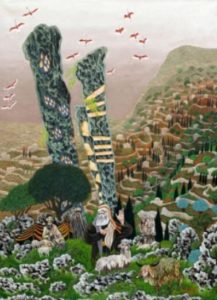 In parshat Veyetze, Yakov builds his wealth through the livestock of Lavan which breed sheep that are speckled and dotted in different ways. The method Yakov uses for this is by peeling the sticks that the sheep saw when breeding. In Nachshon’s painting we see three large sticks which apparently hint to the three types of breeds that were produced called Akudim, Nekudim, and Berudim. There are different explanations what these terms mean, but one explanation is that Akudim means that the sheep had a separately colored band next to their legs, Nekudim means that their wool was dotted, and Berudim means that they had splotches of color on their wool. Whatever the meaning, we see that Nachshon depicted these three types by three separate and very high rods or sticks, going from the earth to the heavens. By this, there may be a hint to the teachings of the Kabbalists that these three types of sheep-breeds indicate three spiritual and heavenly worlds. Also, the concept of sticks or staffs, according to the Kabbalists and Hasidic masters, hints to the letter “vav” in the Tetragrammaton, the connecting letter [vav is a connection suffix and can also mean a hook that binds together] which indicates how the earth is united and connected to the heavens. We see in this context that it seems that Yakov and his wives Rachel and Leah (the women in the background) are associated with this, not only in the Biblical story but also in association with Yakov’s spiritual/Kabbalistic identity as the “connecting/unifying Patriarch.” Next to these figures, we see the figure of the Lubavitcher Rebbe, seemingly meant to continue the direction of Yakov as the leader and “shepherd” of the People, and therefore the Rebbe is dressed in a shepherd’s garb. Although a longer and fuller discussion of this picture is out of our scope of this issue, we will at least like to call the observer’s attention to the number seven theme on one staff that has seven times seven groups of “fire” [like the Omer is seven times seven days], the seven stripes on another staff, and seven splotches on the third staff. There are thirteen birds, as “vav” when spelled fully “vav aleph vav” has the numerical value of thirteen. As we said, the connecting theme of “vav” is very dominant here. The same is true regarding Hebron, whose name indicates connection – “hibur,” and where our Connecting Patriarch Yakov is buried.