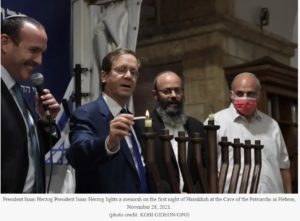 Israeli president Isaac Herzog lit Hanukkah candles in Hebron on the first night of the 8-day long Jewish holiday at the Tomb of the Patriarchs and Matriarchs (Cave of Machpela).

“I am glad to light the first Chanukah candle with you here, in this holy place, the tomb of the Patriarchs and Matriarchs. My connection and my family’s connection to this place stretches back many generations,” he stated.

Herzog’s great-grandmother Faya Hillman, was a survivor of the 1929 Hebron massacre in which 67 Jews were killed by Arab rioters and hundreds injured.

“Rabbanit Faya Hillman, the mother of my great-grandfather Rabbi Shmuel Yitzhak Hillman (who was a dayan at the London Beth Din and had an especially brave relationship with the old yeshiva in Hebron), was here in 1929, during the terrible massacre of the Jews of Hebron,” President Herzog stated.

“She had made aliyah just a few years earlier after being widowed, and she had settled down alone in Hebron. She had made the whole journey from Lithuania, just to live in the holy city of Hebron. A photograph of her, covered from head to toe after being seriously injured in the 1929 riots, appeared under the headline: Mother of the rabbi from London.”

“She was saved from certain death by pretending to be dead after her serious injury.”

“I have no doubt that she would have been very moved by the fact that one of her descendants is lighting Chanukah candles in the Cave of the Patriarchs as the President of the State of Israel,” he concluded.

His father, Chaim Herzog, defended Jewish rights in Hebron on several occasions during his decades of public service. In 1976 when he was Israel’s representative to the United Nations he had Abraham’s purchase of the Cave of Machpela entered as part of an official UN document.

45 years later, his son recalled the episode as he stood at the ancient site to light the hanukiyah (Hanukkah menorah) in honor of the story of the Maccabees and their victory over their oppressors.

“Brothers and sisters,” President Herzog continued, “even today, with all of the difficulties – and won’t ignore the complexities for a second – the Jewish historical connection to Hebron, to the Tomb of the Patriarchs, to the legacy of the Patriarchs and Matriarchs, is beyond a doubt.”

“Recognition of this connection should be above debate.”

“When we are united around the wonderful light of the Hanukkah candles, it is important to respect Israeli statehood and its principles, and to listen to the ‘other’, to respect those who are different, to build bridges and to maintain our togetherness, of course without infringing on the rights of any individual or community, in terms of their beliefs or ideals.”

“We won’t agree about everything, but we must always remember that ‘We are all the sons of one man,'” he stated.

An editorial in the Jerusalem Post stated, “Herzog decided he wanted to light the first Hanukkah candle at a site that more than any other site represents the Jewish historical claim to Israel.” Another Jpost op-ed stated, “Given that Abraham is the patriarch of both the Jewish and the Muslim people, Herzog might have thought that lighting the first Hanukkah candle in the Cave of the Patriarchs where Abraham, Sarah, Isaac and Jacob are buried would be a symbolic act of unity.”

History of the Maccabees in Hebron

Hebron was the site of a decisive battle during the rebellion of the Hasmoneans against the invading Seleucid Empire. The story of Hanukkah in which the heroic Maccabees fought to reclaim the Temple from the imperialist Antiochus is well known.

Hebron’s role in the Maccabean Revolt is mentioned in the apocryphal Book of the Maccabees and in the works of the great historian Josephus.

Many of the Hasmonean battles took place in the Mount Hebron region, known today as the Hebron Hills, or Har Hevron regional council. Communities such as Beit Tzur were sites of fierce battles won by the Judean rebels.

I Maccabees 5:65 states:
“Afterward went Judas forth with his brethren, and 20 fought against the children of Esau in the land toward the south, where he smote Hebron, and the towns thereof, and pulled down the fortress of it, and burned the towers thereof round about.”

The Antiquities of the Jews by Josephus Flavius Book 12 Chapter 8 paragraph 6 states:

“But Judas and his brethren did not leave off fighting with the Idumeans, but pressed upon them on all sides, and took from them the city of Hebron, and demolished all its fortifications, and set all its towers on fire, and burnt the country of the foreigners, and the city Marissa.”
The Jewish War by Josephus Flavius Book IV Chapter 87, paragraph 7 states:

“Simon, having thus, beyond expectation, penetrated into Idumaea without bloodshed, first of all, by a sudden attack, made himself master of the city of Hebron, where he possessed himself of a vast booty, exclusive of the large supplies of corn which he seized.”

“If we are to credit the inhabitants, Hebron is not only a town of greater antiquity than any in that country, but even than Memphis in Egypt, its years being computed at two thousand three hundred. They relate that Abram, the progenitor of the Jews, here fixed his abode after his departure from Mesopotamia, and that from hence his posterity went down into Egypt. Their monuments are still shown in that town, of the most beautiful marble, and of exquisite workmanship. At the distance of six furlongs, is pointed out an immense turpentine-tree, which, if tradition is to be believed, has continued there from the creation until the present time.”