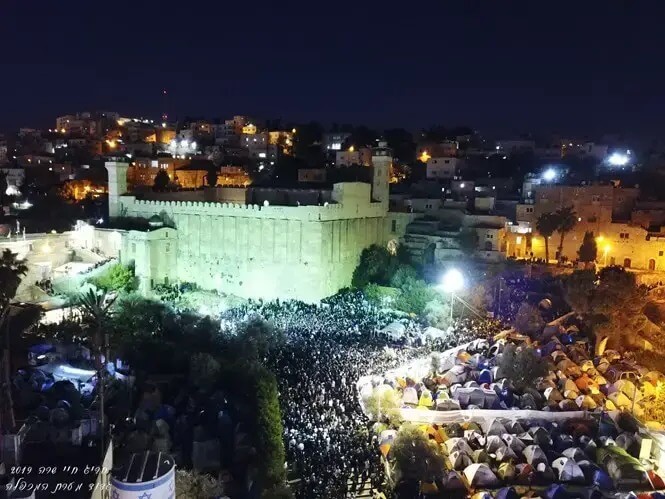 A record breaking 45-50,000 people from Israel and all over the world joined the Jewish Community of Hebron for Shabbat Chayei Sarah last weekend. As the weekly Torah portion of Chayei Sarah is read, history is relived in Ma’arat HaMachpela by those who have come to listen to the chapter in Bereishit which discusses Abraham’s purchase of the Cave for his wife, Sarah, in the spot in which it took place.

Visitors from Israel and all over the world traveled to Hebron for Shabbat; some enjoyed home hospitality, others slept in the neighborhood schools, while many others camped out in tents and trailers surrounding the Cave. Large tents accommodated meals for the guests and the Egged bus company added extra bus lines to account for the increased traffic to and from Hebron.

The Hall of Isaac and Rebecca, housing the memorial monuments of our patriarch and matriarch- Isaac and Rebecca, and the location of the sealed entrance to the underground burial chambers, was open to the public (this area is only open to non-muslims 10 times a year)

Articles were published in newspapers and online publications in preparation for the event. HaMizrachi compiled a special edition which included an article by Rabbi Herschel Shachter discussing Sarah’s burial as the first Jewish burial in history. Others who contributed to the magazine’s Chayei Sarah edition include; Rabbi Berel Wein, Rabbi Zev Leff, Sivan Rahav Meir, and other influential public figures. Articles about Hebron by historic figures such as David Ben-Gurion were published as well. HaMizrachi is a publication of the World Mizrachi Movement, which was founded in 1902 and linked to the Bnei Akiva youth movement. For the full issue click here: https://view.flipdocs.com/?ID=10004239_798843

OU Torah Tidbits released a special issue for the event as well. 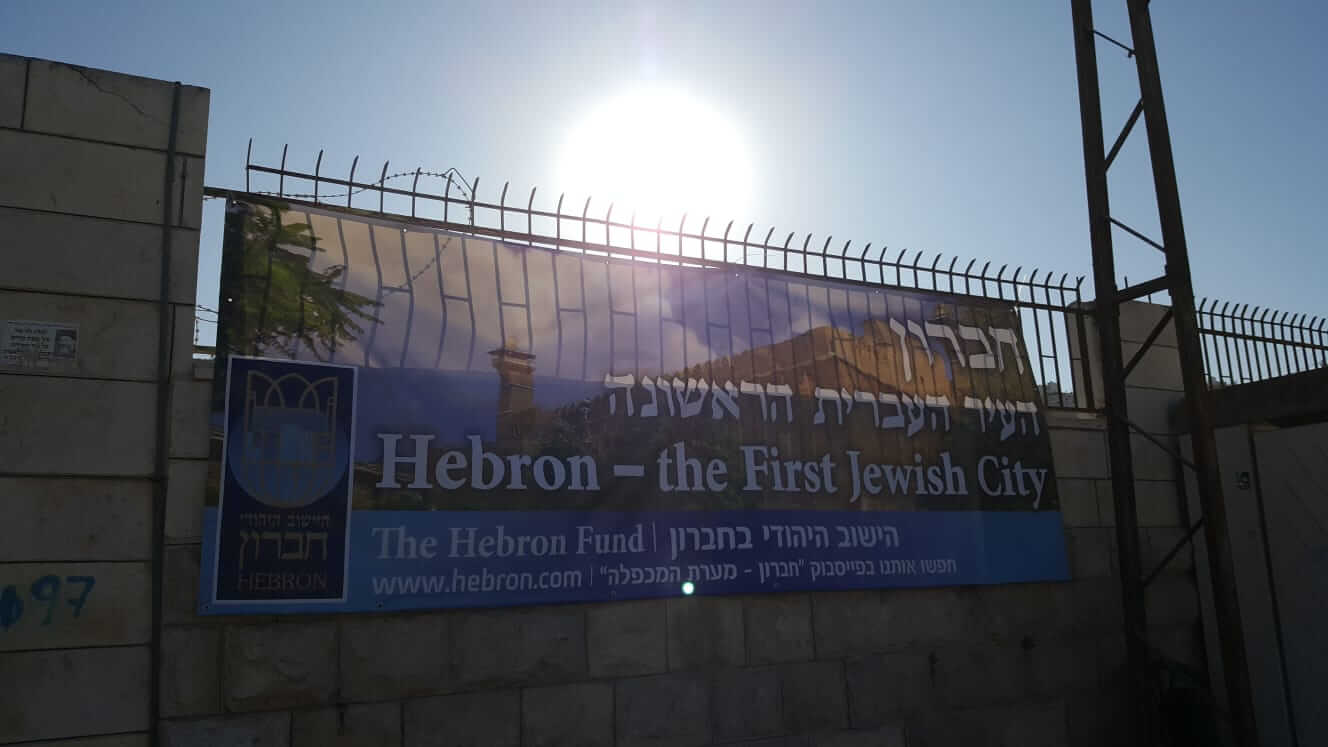 Each year, The Hebron Fund organize a VIP Shabbat, with great accommodations, 3 private catered meals, a hot kiddish, onegs, tours, and more. This year’s group included visitors from the USA, olim hadashim (new immigrants), lone soldiers, and VIP guests from Israel. The Hebron Fund dinner was held at the Gutnick Center and welcomed guest-lectures including retired General Uzi Dayan. He conveyed his pride in the Jewish community of Hebron and the world for reestablishing a Jewish presence in Hebron, and marveled as to how far the nation has progressed in his lifetime.

Rabbi Eli Ben-Dahan, who has served as a government minister and Member of Knesset for the past six years, also spoke at the Hebron Fund dinner. He shared a memory of when he served as an assistant to then-Chief Rabbi Mordechai Eliyahu. He described HaRav Eliyahu’s first visit to the Ma’arat Hamachpela following its liberation in the Six-Day War in 1967. The Chief Rabbi said the experience was unlike a tourist visit to a Holy site, but rather like a child coming home to his parents after a long trip.

Commander of the Judea Brigade, Colonel Itamar Ben Chaim, spoke about the IDF’s commitment to protect the city and Holy sites of Hebron the surrounding areas and expressed the honor he feels to do so.

David M. Weinberg, vice president of the Jerusalem Institute for Strategy and Security, and Rabbi Eitan Shnerb, the head of an educational institution in Lod, who was injured in a terrorist attack that claimed the life of his 17-year-old daughter in August, also spoke to our guests over shabbat.

Saturday night’s barbecue, where IDF soldiers, together with the Hebron Fund VIPs enjoyed good food and dancing, ended the weekend on a high note. We are already looking forward to next year’s Shabbat Chayei Sarah (Nov 13-14 2020, it’s never too early to contact us!). We hope to see you there! 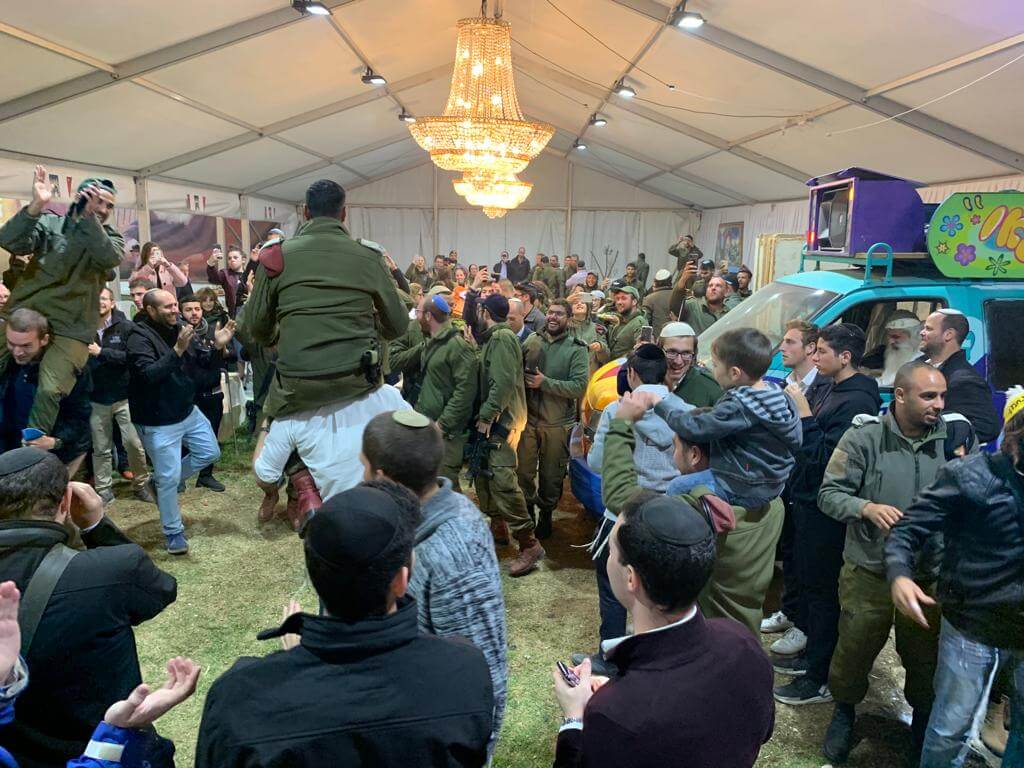