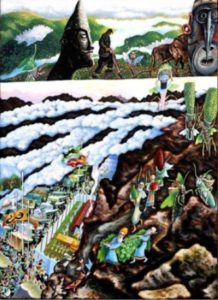 In this painting, we see that the twelve spies all become grasshoppers some on a greater level and some on a lesser level, except for Joshua and Kaleb seen here carrying a large grape, as indeed the Midrash indicates that they so did since the other spies did not have the [spiritual] strength to do so.
In Kaleb’s argument with the other spies, he says, “sar tzilam m’alehem veHashem itanu al tiraum” – “their shadow [of protection] has left them, and Hashem is with us, do not fear them [the foreign nations in the Land of Israel].” The word “tzilam” can also be read as “tzelem” as in the word “tzelem Elokim,” which indicates the Godly soul of man. By these words, Kaleb may have hinted that not only Divine protection has left the foreign nations, the enemies of Israel, in the Land, but that their internal Divine level/soul of connection to God has also left them. It seems that according to this, we, therefore, see 1. a figure of a monkey, 2. a fossil/statue of a man, and 3. a man plowing land like the animals next to him in the top part of the painting meant to depict the state in the Land of Israel from which the spies came. It seems that these three depictions may represent three types of loss of “tzelem Elokim”/soul. The first “monkey” image may depict how man can turn literally into an animal and lose his human soul, as is known from the Midrashic description of the episode of the Tower of Babylon in which people turned into apes. The second depiction of man as a fossil/statue can depict the loss of a soul due to far-past death/extinction. The third depiction of loss of soul is, albeit when man is literally alive as a human, but he lives an animalistic existence totally engrossed with earthly matters, “plowing the earth” like an animal. These three depictions may be seen to parallel the three Patriarchs of Israel to whom the Land was promised and through whom Israel also has dominion in the Land to cause these three states upon their enemies. The depiction of the enemy as a monkey represents Avraham’s prowess since Avraham represents the side of the Divine Light at its source, and therefore, those who oppose Israel will, measure for measure, lose their Divine light, i.e., the soul, at its very source, and will turn into “animal” creatures. The second depiction of a fossil/statue represents Yitzhak’s prowess, as Yitzhak sacrificed himself even to a level of death at the Akeida, and thus the loss of life, measure for measure, can be attributed to him. The third depiction of man plowing like an animal represents Yakov’s prowess, as Yakov represents the union and connection of the Divine light (the attribute of Avraham) with the earth (the attribute of Yitzhak), so here we do see a live human, indicative of Divine light. Still, his engagement, i.e., connection with the earth, is of animalistic nature, measure for measure with Yakov’s attribute.
Indeed, it is clear from this parsha that the Patriarchs’ connection to the Holy Land is a central matter in the fight against the influence of spies, both in Kaleb’s inspiration stemming from his visit to Patriarchal Hebron and also in Moshe Rabeinu’s ability to save Israel since our Sages explain that the reason Hashem offered that Moshe is saved, and ultimately his position to plead upon Israel, was due to Hashem’s promise to the Patriarchs to give the Holy Land to their offspring of which Moshe was a member.