Tel Hebron is an ancient archaeological site and a residential neighborhood in city of the Patriarchs and Matriarchs. 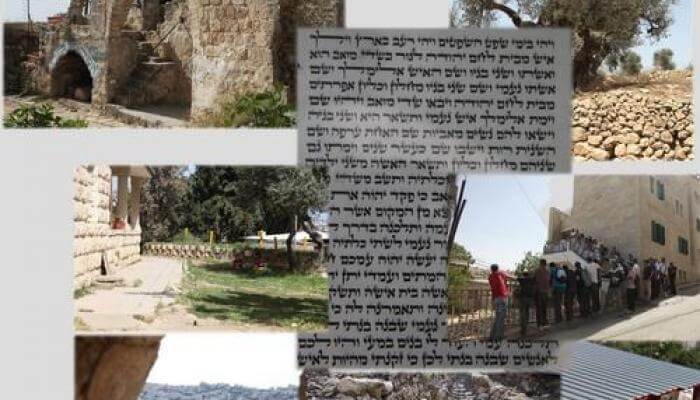 Tel Hebron is an ancient archaeological site and a residential neighborhood in Hebron. The residential section is referred to as Admot Ishai and consists of several caravan style homes and the Beit Menachem building. Located within the residential section is an archaeological site known as Tel Hebron. Archaeologists and Bible scholars believe that the Patriarchs Abraham, Isaac, and Jacob, and the Matriarchs Sarah, Rebecca and Leah, who are buried in the nearby Tomb of Machpela, lived in this area almost 4,000 years ago.

A three meter high wall can be seen in the neighborhood which is estimated to be 4,500 years old, dating back to the days of the Biblical Noah. Studies show it was originally 10 meters high and 6 meters deep. Opposite this wall is another one built 3,700 years ago during the days of Abraham.

Between the two walls are stone stairs dating back 4,000 years. Archaeologists postulate that the original gate of ancient Hebron might be found by digging under the present day street where the stairs end. This may be the gates of Hebron mentioned in the Bible where Abraham purchased the Cave of Machpela and surrounding field for the Jewish people as stated in Genesis chapter 23.

In 1807, the Sephardic Jewish community bought the entire area of the Tel and transferred the title to some of this land to the Ashkenazi community. During the British Mandate period, there was a plan to establish a spacious residential quarter but after the 1929 riots the Jews were expelled from this area (and the rest) of Hebron.

The Tel Rumeida area remained unsettled by Jews until 1984, when the government of Israel gave the Jewish community permission to build a residential section, and when seven mobile homes were towed to the site. The seven families that moved into them lived alone and under hard conditions that only worsened in 1997, when, under the Wye Accords, Hebron was divided into two parts. On August 22, 1998, a terrorist infiltrated the Jewish area from Palestinian Authority territory and murdered Rabbi Shlomo Ra’anan, a saintly and exemplary person – a grandson of the revered Rabbi A.I. Kook. In response to this terrible murder, the Israeli government approved the construction of a permanent Jewish residential building in Tel Rumeida which led to the consolidation of the Jewish presence in the area.

Today the neighborhood is made up of the original 7 caravans and a building – Beit Menachem which was dedicated in 2005. Situated above the Hebron Archeological Park, it is named in honor of the Lubavitcher Rebbi, Rabbi Menachem M. Shneerson, and is home to seven Jewish families and a Torah study hall.

Under the present day Beit Menachem building, the ruins of an old Jewish home, dating back 4,000 years are displayed. The columns were built 2,700 years ago during the days of King Hezekiah, in the First Temple period. This is the location where the King’s Seal was discovered. This stone artifact features the ancient Hebrew words “L’Melech,” or “to the King,” and “Hebron.” Other finds include a wine press and a grainery.

On the top of the hill is the Tomb of Jesse and Ruth, an ancient burial site for the father and grandmother of King David. Some researchers hypothesize that because of the strategic hilltop location, this may the the site of King David’s palace, when he ruled Hebron as the first capital of Judea.

In Arabic the site is referred to as Tel Rumeida, which comes from the word for ash grey, a reference to a fire that occurred in the area.

In May of 1811, Rabbi Haim Yeshua HaMitzri, nicknamed Haim the Egyptian Jew, made the second of two land purchases on behalf of the community through the Magen Avot organization. This area encompassed 800 dunam of land including the area of Tel Hebron and the Tombs of Ruth and Jesse.

Today, the Tombs features a small synagogue and study hall along with archaeological finds such as a stone building dating back about 1,500 years that may have been a synagogue.

Many writers and historians from past generations have mentioned visiting the Tombs, with several reporting that an underground tunnel might connect it to the Tomb of Machpela. These writers include: Meshullam of Volterra, 1481, Rabbi Moshe Basola, 1521, Haim Horwitz, 1835, Rabbi Menachem Mendel of Kamenitz, 1839, Lady Judith Montefiore, 1885, Louis-Hugues Vincent, 1923, Zeev Vilnai, 1935, and Jacob Pinkerfield, 1946.

Three separate archeological excavations in the area of Admot Ishai/Tel Rumeida uncovered numerous remnants dating back as far as the early Canaanite (Bronze) Era. Jewish artifacts and other findings from the times of Joshua, the era of the Kings, the first and second Temples, the Bar Kokhba revolt and the times of the Mishna and the Talmud bear testament to the importance of Hebron as a Jewish city throughout history.

Between 1963 to 1966 Professor Philip C. Hammond directed the American Expedition to Hebron. The excavations took place on the southern side of the tel and uncovered the King’s Seal.

In 1999, the Tel Hebron Excavations took place from April to September and uncovered the steps. they were headed by Emanuel Eisenberg, from the Israeli Antiquities Authority.

In 2014, excavations again began at Tel Hevron sponsored by the Israeli Antiquities Authority with involvement from the Culture and Sports Ministry and the Civil Administration. Emanuel Eisenberg returned to the excavation together with Prof. Shlomo Ben-David from Ariel University.