The ancient burial cave of Othniel Ben Knaz, the first judge of Israel has been the site of prayers for generations.

Tucked away in what is today a residential street in Hebron is a burial cave which for generations has been venerated as the Tomb of Othniel, the first judge of Israel. Othniel, (also pronounced Otniel or Osniel), was considered a heroic Jewish leader who brought the Jewish people back to their roots after the death of Joshua. Referred to as Othniel Ben Knaz, he is mentioned both in the Book of Joshua and Judges.

On April 25, 2016, hundreds visited the site in what has become an annual pilgrimage. The local Judea Brigade Commander who helped arrange the visit was quoted by Israel National News as stating, “For me personally, it was inspiring to see the hundreds of visitors, citizens together with tourists from abroad, on a secure trip to the tomb of Othniel ben Kenaz. We are proud to have escorted this visit.”

It states in Judges 1:12-13, “And Caleb said, “He that shall smite Kiriat-Sepher and capture it; to him will I give Achsah my daughter for a wife. And Othniel the son of Knaz, Caleb’s younger brother, captured it; and he gave him Achsah his daughter for a wife.” This story is also mentioned in Joshua 15:17.

The text continues in Judges 3:9-11, “And the children of Israel cried to the Lord, and the Lord raised up a savior (champion) to the children of Israel who saved them; Othniel the son of Knaz, Caleb’s brother, who was younger than he. And the spirit of the Lord came upon him, and he judged Israel; and he went out to war, and the Lord delivered into his hands Cushan-rishathaim the king of Aram; and his hand prevailed upon Cushan-rishathaim. And the land had rest forty years; then Othniel the son of Kenaz died.”

Othniel is also mentioned in I Chronicles 4:13 and in the Talmud in Sotah 11b.

There is a strong connection with Hebron to the story of Caleb. He, along with Joshua, was one of the twelve scouts to investigate the land of Israel during the wandering in the desert. Hebron was one of the main sites where the scouts arrived.

Ten of the twelve scouts brought back ill reports of the land. However Joshua and Caleb disagreed and spoke positively of the land despite the perceived struggles. (Numbers 13:22)

A Midrash says that during their visit, Caleb visited the Cave of Machpela, burial site of the Patriarchs and Matriarchs.

For a full description of Caleb’s connection to Hebron click here. 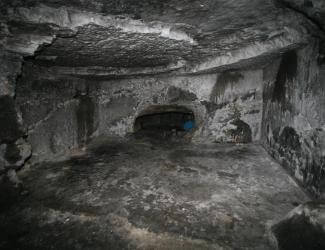 The Tomb of Othniel

About 200 meters west of Beit Hadassah, at the top of a rocky incline, is a burial cave. In what is known toward as Policeman’s Square in a busy residential street, is a site revered for generations as a burial cave. The site corresponds with how the Mishna, in Bava Batra 101 describes the traditional burial practices of the Jewish people of that time period.

Throughout the generations, it has been revered as the tomb of Othniel Ben Knaz, brother (kinsman) of Caleb. The site has been mentioned by many travelers over the generations.

One such traveler was Menachem Mendel of Kamenitz, who ended up remaining in Israel and becoming the first hotelier in the Land of Israel. He wrote about his travels in his 1839 book entitled Sefer Korot Ha-Itim, later translated into English as Book of the Occurrences of the Times to Jeshurun in the Land of Israel.

Menehem Mendel wrote, “outside of the city [of Hebron] I went to the grave of Othniel ben Kenaz and, next to him, are laid to rest 9 students in niches in the wall of a shelter standing in a vineyard. I gave 20 pa’res to the owner of the vineyard.”

Another author and traveler who reports visiting the tomb was J. J. Benjamin, also known as Benjamin II, a reference to the famous Benjamin of Tudela, the writer and traveler who visited Israel circa 1165. Benjamin writes in his book Eight Years in Asia and Africa (Hanover, 1858), “Likewise outside the city, towards the south, in a vineyard, which was purchased by the Jews, are the graves of the father of King David and of the first Judge, Othniel, the son of Kinah.”

Popular times for pilgrimages to the site include Tisha B’Av and Lag Ba’Omer. Since 1997, the site has been designated in the H1 territory (85% of Hebron controlled by the PA, and not accessible to Jews). Numerous legal battles have taken place in recent years over prayer rights. However despite the tension, visitors still come to pay their respects to the leader of the Jewish people in from ancient times.