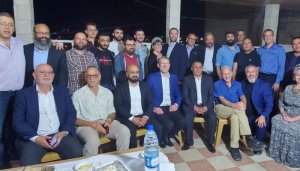 Jewish Hebron residents joined their Muslim neighbors for a traditional iftar break-fast meal hosted by the Judea and Samaria Chamber of Commerce. During the Islamic month of Ramadan, Muslims fast during the day and break their fast at sundown. The meal was held in Hebron at the home of businessman Ashraf Jabari who together with Avi Zimmerman, a resident Ariel, head the chamber of commerce.

International Spokesperson for the Jewish community in Hebron Yishai Fleisher was one of the Jewish attendants to the event which was held for the first time in 2019. Coronavirus prevented the event from taking place last year, but due to the high rate of vaccinations and dramatic reduction in infections, the country has slowly been opening up.

He dubbed it “open iftar.” Although Hebron is often described as a “flashpoint city” in the mainstream, media, there are many examples of Palestinian Authority residents and Jewish “settlers” interacting on a daily basis.

Fleisher, on his weekly podcast said that while he did not want to whitewash the presence of the Jihad ideology he say a counter-movement of Arab residents who want to join in Israel’s success story.

“In Hebron there is a very strong presence of Hamas,” he said, and noted that the current mayor of the PA portion of Hebron was a convicted terrorist.

“However more and more Arab residents are realizing that Allah has blessed the Jews in Israel and they can share in that blessing,” he said. “It’s better to go on the side of the Abraham Accords, live with Israel and move forward. They recognize that the jihadist modality is not good for them. It is not in their economic future interest.”

Other participants in the iftar included Dr. Noam Arnon, the community’s Hebrew-language spokesperson and author of several books on the city. In an interview with the Jerusalem Post, he called the event a “revolution” that will create peace for the next generation. Jabari called Arnon his “brother.”

In addition to economic issues, the COVID-19 pandemic also led to building bridges and sharing resources to benefit residents of both the Israeli sections and Muslim sections of the City of Abraham. 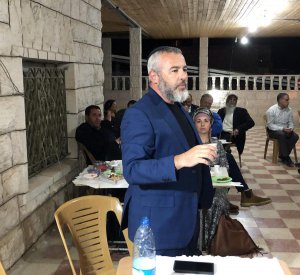