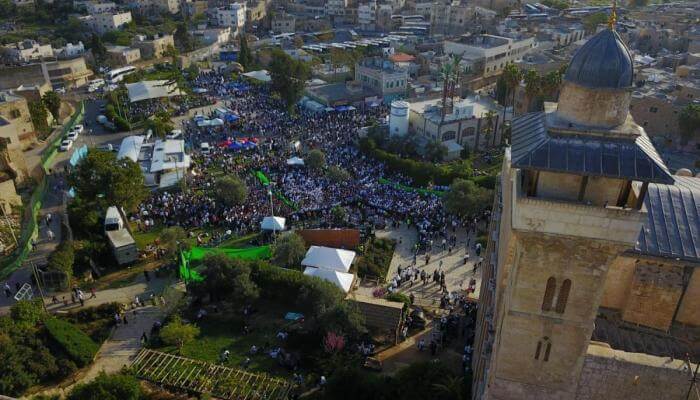 Over 35,000 people attended the Passover music festival in Hebron on Monday April 2, 2018. The annual holiday event included children’s activities and tours of the historic sections of the city and surrounding nature areas. News outlets reported that over 15,000 people visited the Tomb of Machpela in one day, a significant increase from last year. The Facebook and YouTube live streams of the concert attracted even more viewers throughout the world.

The next morning, thousands packed the Hall of Isaac & Rebecca for Passover prayer services at dawn. The musical ceremony was led by Rabbi Shmuel Eliyahu, chief rabbi of Tzfat and accompanied by guitars, flutes, drums and plenty of singing and dancing.

The Isaac Hall includes the “entrance to the Garden of Eden,” a hole in the floor that leads into the cave where the actual underground tombs are located. The cenotaphs, or memorials to Isaac and Rebecca are also located there.

The hall is open to the general public only ten times throughout the year, mostly corresponding to Jewish holidays. Normally the hall is reserved for Muslim prayers. In a rotation agreement with the Muslim Waqf, Islamic services are held in the normally Jewish area on ten select days throughout the year.

Rabbi Eliyahu stated, “we had a taste of the Biblical ascension of the Temple. The Temple is called the House of God, not our house, and it is our mission to remember the joy in every prayer.”