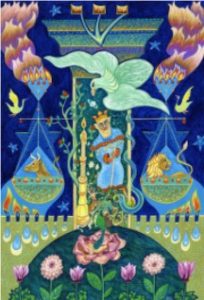 In this painting, we yet again see the number seven theme: we see Seven purple flowers, seven drops on each side of the painting, and seven lamps apparently designated for fire that some have fire, and some do not.
The significance of seven candles of fire decreasing as approaches the center may be explained by the Kabbalistic teaching that the central lamp in the Menora corresponds to the Shabbat when there is no judgment indicated by fire, and the days closest to Shabbat are the farthest away from judgment, but the further the days get away from Shabbat judgment-fire is greater. In this painting, we see that the center is amidst the holy Temple, which like the holy Shabbat, is a source of mercy versus judgment as can be seen in the law that a negligent murderer who reaches the altar in the Temple is not to be killed (there are a number of conditions for this).
There also seems to be a relationship between the three aspects of seven we just mentioned: drops of water represent kindness according to the Kabbalists, fire is a symbol of judgment, considered the opposite trait of kindness, and flowers/plants is considered a “middle path” between these extremes, as plants were created on the third day of Creation, associated by the Kabbalists to the “middle path.”
We also see here animals of the Merkava “Ezekiel’s Chariot”, a lion to the right side of the balance balancing towards kindness, ox to the left balancing towards judgment, an eagle and a crowned man of kingly appearance signifying a “man on the throne” at the center. We see the planet Saturn, called by our Sages “Shabtai” associated with the Shabbat and also the attribute/sefira of “Kingship” at this man’s head.
We see five blue stars each with five points that could correspond to five spiritual worlds each comprised of the same worlds on a miniature level, according to the Kabbalists. We also see five red fires above on each side corresponding to five aspects of judgment associated with fire. We see Nine fires ascending from five lamps on each side, perhaps hinting to a Kabbalistic concept called “nine straight lights and nine returning lights.” Blue is associated to kindness, while red to judgment, Kabbalistically.
We see what seems to be the Tree of Life with seven fruits opposite a snake known to be associated with the Tree of Knowledge; it seems that this snake has the fruit of this tree in his mouth. In between and below the man we see many animals seeming to represent man’s mastery over all creation, especially in the context of the “animals” in Ezekiel’s Chariot depicted here, which are considered, by our Sages (Hagigah 13b), to be the “leaders” of various types of creatures (“eagle is the king over birds, lion over wild animals, ox over the domesticated.”)
The Man is dressed in blue and red, symbols of kindness and judgment, wearing seven bells on his body and a crown on his head that has three points. This follows with the Kabbalistic teaching which groups the sefirot into two groups, one of three sefirot and the other comprised of seven, which are indeed associated by the Kabbalists to head and body aspects, respectively.
Hebron was the Cradle of King David’s rule, considered the prototype of all Jewish kingship. The theme here of man’s sovereignty over all creation and his connection to the Chariot found amidst the Temple here seem to hint to place of man in uniting all creation towards the service of Hashem in the Temple and before the Holy Presence which is associated with holy Chariot envisioned by Ezekiel.