Return to The Holy Land 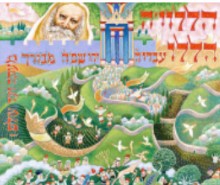 This parsha discusses preparations for the settlement of the Land of Israel. Israel’s return to the Holy Land and the Holy City of Jerusalem are important parts of the Redemption. Therefore, this painting, which places emphasis on Jerusalem and towns and fields in the Holy Land, also has many redemptive themes as well. In this painting, we see three flags with “bekarov mamash”- “very soon” wishing for the coming of Mashiach. As well, we also see the face of the Lubavitcher Rebbe with a regal banner next to him, a matter apparently meant to hint to the Rebbe’s strides towards the coming of Mashiach. We see seven birds, seven towns [while Jerusalem is the seventh], the favorite number of the Torah and also in Nachshon’s paintings.
We also see ten walls, perhaps hinting at the ten gradations of holiness found in the first chapter of tractate Kelim. This is done by walls since walls signify barriers and gradations.
We also see three shofars: one blown by man, a second blown by gazelle from which a shofar can grow, third as if emanating from the landscape. The shofar is also called in the Torah “yovel.” The fact that a shofar emanates from the Land may hint at the sanctity of Yovel, the fiftieth sanctified year in the Holy Land. The prophets also describe the shofar as a redemptive instrument heralding the redemption. Thus, we see that from this redemptive “Yovel/horn” emanate two small shofars which may hint to the two Messiahs ben David and ben Yosef.
Seen here are also hasidim bringing the first fruits and Menora to the Temple. Indeed, these Hasidim may also be hinted at in the verses mentioned here describing them as “servants of Hashem.” This matter may also hint at the place of the servants of Hashem in bringing the Redemption.