The Giving of the Torah 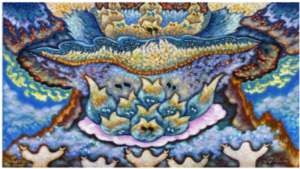 In this painting, we see the opening words of the Ten Commandments found in this parsha. We see a vision of fire and smoke, depicting the Giving of the Torah. Within the fires are two yods which commonly signify the Name of Hashem, representing the Revelation of Hashem’s Presence/”Name” at the Giving f the Torah. Moreover, there is a famous saying that two yods represent two “yiddin,” I.e Jews, that when united in the service of Hashem bring the Holy Presence/Name to rest amongst them, as our Sages taught that “two who are occupied with the study of Torah the Holy Presence rests amongst them.” This teaching receives even more meaning in the context of the Giving of Torah in general since the Torah teaches that just before receiving the Torah, the “People [in singular usage] encamped before the Mountain.” Our Sages interpreted the singular usage for “encamped” – “vayihan” – instead of what would be normally used, the plural “vayahanu,” in this verse to signify that the People at large became all united “as one person with one heart.” This matter, juxtaposed to the Giving of the Torah, is an exemplary instance showing how the unity of Israel is crucial for the Holy Presence to dwell in their midst and for the Torah to be revealed upon them.
Also to be noticed are the five enrobed men with their hands outstretched towards the heavens, at the bottom of the painting. It seems that these five figures, each with a right and left hand, represent the Ten Commandments, which can be divided into two groups of five on the two tablets. The first five are commandments associated with man’s conduct towards Hashem, while the last five commandments are associated with man’s conduct towards his fellow man. The commandment to “honor one’s parents” is considered by our Sages to pertain to one’s conduct towards Hashem since the honor of parents is compared, according to Scripture, to the honor of Hashem. Simply put, by honoring parents, one shows respect for their “source of being.” Ultimately, by so doing, one will also come to recognize “the Source of all Being,” Hashem.
Hebron ties many of these concepts together: this is the City through which we honor our Parents of Klal Yisrael, and also due to these common roots, our People are also united “as one person with one heart,” thereby leading to Hashem’s Presence to rest amongst us, delivering us the Torah – “Hebron – that is Torah, for one who is occupied with it is called a haber [Torah scholar].”