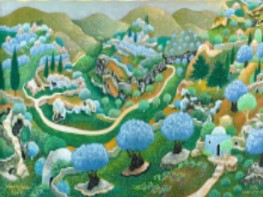 This Painting which Nachshon tied to this parsha Behar, places much emphasis on the Land of Israel and its vegetation and rural setting. Indeed, this parsha talks extensively about the Holy Land through the mitzvot of Shmita and Yovel. We see seven bluish trees of the same type. Four are “rooted” upon a rock, while three are not. The four correspond to the four Matriarchs, as the Kabbalists connect the feminine to the earth/rock, while the three trees correspond to the three Patriarchs. Between them is a house seeming to hint that the Jewish home is made from the unity between masculine and feminine. Right next to the house, there are seven bushes close to the earth. Perhaps this parallelism between the “lofty/heavenly” trees and the “earthly” bushes corresponds to the teaching in the Zohar that discusses the two periods of seven days in the inauguration of Solomon’s Temple to correspond to the seven years Yakov worked for Rachel and the seven years he worked for Leah. Rachel corresponds to the more “earthly” aspect, whereas Leah corresponds to the more “lofty/heavenly” aspect. In any case, both feminine aspects of “Rachel” or “Leah” correspond to the feminine “Holy Land,” in a Kabbalistic perspective, as well as the number seven, as we have discussed in a previous painting.
In the distance, we see that there are thirteen trees on one hill, and at the foot of them, another four. This perhaps may be understood through the teaching according to the Kabbalah, where the thirteen attributes of mercy are rooted to the four yods of the Tetragrammaton when spelled out with yods (for example: yod vav dalet, hey yod, vav yod vav, etc. – a discussion of this is outside our scope here).
Also in the distance, we see seven similar-looking trees at the bottom of a hill on one side of a path and another three-same-looking trees on another side of that path. This may hint to the Kabbalistic teaching that groups the ten (famously known) sefirot into two groups: the “upper/more heavenly” three sefirot and the “lower/more earthly” seven sefirot. There is also a teaching that connects these ten to the number thirteen we just mentioned when another three “upper” aspects are added (a discussion of this is outside our scope here.)
The intricacies of “heavenly” and “earthly” numbers hinted here may be indicative of connections between heaven and earth, between the holy and the mundane, inherent in the Shemita and Yovel cycles described in this parsha. This matter may also be hinted in the painting, as we see the beautiful sky touching the beautifully illustrated earth. The Holy Land is holy earth regardless of the Shemita and Yovel, but at the time of Shemita the Land has special sanctity within the “Shabbat of Hashem,” and also the produce of the Land carries special sanctity recognized halachically as “kedushat shevi’it.” Of course, the Yovel takes this matter to yet another level, causing slaves to be emancipated, lands returned to their previous owners, etc.
Hebron, the City of Unity and City of the Patriarchs and Matriarchs, imbibes these messages. The verse we say numerous times a day in the recitation of the Shema says, “so your life shall be prolonged upon the Land Hashem has promised to your Patriarchs like the days of the heavens upon the earth.” This juxtaposition of the Patriarchs to “the heavens upon the earth” may hint to this same idea: through the Patriarchs and their cherished city, Hebron, we may benefit from prolonged days filled with earthly manifest and yet heavenly meaning like “the heavens upon the earth.”