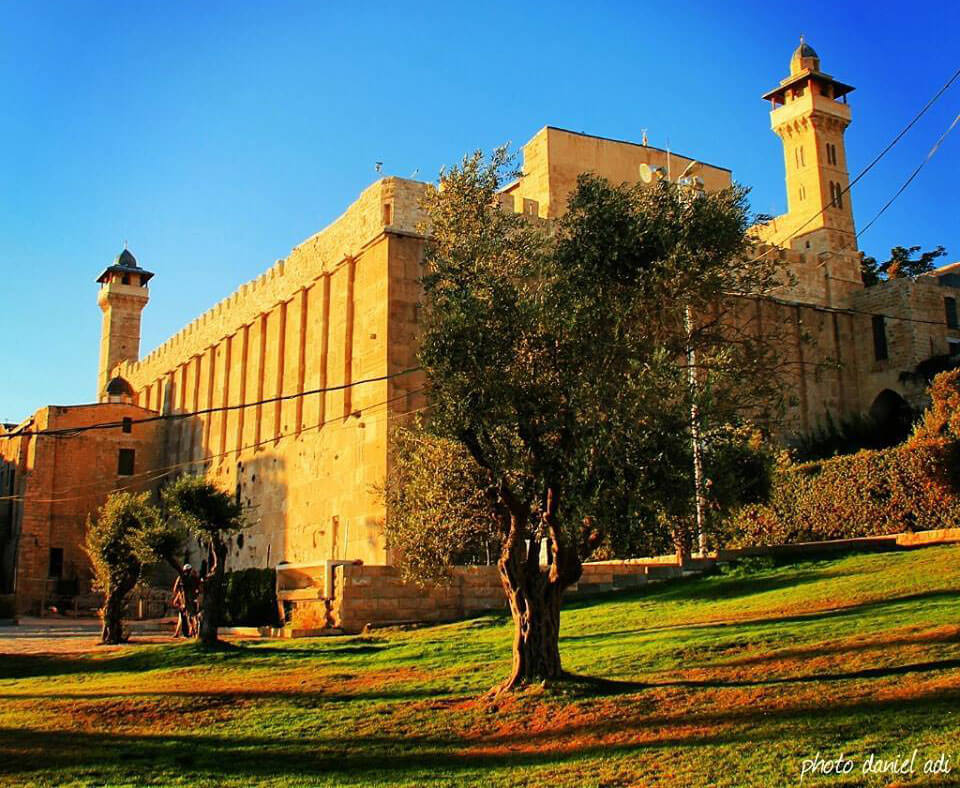 The Cave of Machpela has an ancient history dating back to the earliest man and woman in the Bible.  Adam and Eve are said to be buried in the cave, the first of four couples to be buried there. The Cave of Machpela and the field around it were Abraham’s first acquisition in the Land that God promised to him and his descendants.   Besides Adam and Eve, the three patriarchs and matriarchs of the Jewish people – Abraham and Sarah, Rebekah and Isaac, and Jacob and Leah – are buried there as well. These three holy couples gave birth to the Jewish people and brought the awareness of God to the world.  Since Biblical times, the Cave of Machpela has been a place of prayer, meditation, and study.  The cave is respected as a gateway to the Garden of Eden, where our prayers have a special potency. Hebron was the capital of the tribe of Judah. King David began his kingship here.  From Hebron, he was crowned King of Judah seven years before he was crowned king of Israel in Jerusalem.

The Meaning of the Word Machpela

The word “machpela” means “doubled.”  There are multiple interpretations for what this refers to. The Talmud (Eruvin 53a) cites two main opinions:

Alternately, machpela could be a reference to the reward of those buried there: ”Whoever is interred there has multiple rewards” (Midrash Breishit Rabah 58).

Another meaning for Machpela is “folded”.  The Zohar explains that Jerusalem and the entire Land of Israel was folded under the Cave of Machpela.

The Purchase of the Cave of Machpela in the Bible

“Let him sell me the cave of Machpelah that he owns, which is at the edge of his land. Let him sell it to me, at the full price, for a burial site in your midst.” (Genesis 23:9) 3,800 years ago, Abraham purchased the cave to bury his wife Sarah and as an eternal inheritance to his children.  The Bible tells the story of this purchase in detail, the first Jewish acquisition of land in the Land of Israel.

Abraham bought the “cave at the edge of the field” for 400 silver shekels. Even though God told Abraham that this was his land as an inheritance and the Hittites offered to give him the cave for free, Abraham wisely insisted on pay full price for it, to insure that there would no question of ownership over this land and perhaps with prophetic insight into the future when others would try to claim it.

His purchase is also used as the source for establishing the four different methods by which land can be legally acquired in Jewish law – by money, by deed, by witnesses, and by physical possession.  The Bible records that Abraham used all four methods to acquire the Cave of Machpela and field surrounding it, establishing him and his descendants – Yitzchak, Yaakov, and the Jewish people – as its rightful owners for all time to come.

The Machpela Building Built by Herod

Around 2,000 years ago, Herod, king of Judea, built the tomb structure atop the cave complex.  During the Roman era, thousands of magnificent building were erected, including the Temple in Jerusalem, Masada, Herodian, CaesareaCeasaria, the Coliseum in Rome, and many others.  Today, the only example of magnificent Roman era architecture that has survived in its entirely is the Machpela building in Hebron.

The Temple in Jerusalem and the Cave of the Patriarchs were built in a similar style, using colossal Herodian stones.  However, the rocks around Hebron used to build the Machpela building are much harder than the soft limestone around Jerusalem used to build the Temple Mount.  Even without the use of iron rods or other structural aids, the Machpela building has stood and been in use for 2,000 years, a miracle of endurance through centuries of wars and earthquakes.

The Cave of the Patriarchs Under Christian and Moslem Rule

The Christian and Moslem conquerors of the Land of Israel over the Centuries built and added on their own religious structures to Herod’s monumental building.

The Christian Byzantines built a large basilica and Church over the Cave of the Patriarchs, incorporating the Herodian structure into their structure.  Jews were officially forbidden from living in the holy city.

In the year 638, the Moslem Arabs conquered Hebron and turned the church into a mosque.  At this stage, the Muslim authorities were tolerant of Jewish prayer at the site.

In the year 1100, the Crusaders conquered Hebron, expelled all the Jews, and reconverted the mosque back into a Church.

The Moslem Mamelukes conquered the city in 1260 and again turned the site into a mosque.  The Mamelukes were not as tolerant of the Jews as the previous Muslim rulers, and barred Jews and Christians from entering the Machpela building. 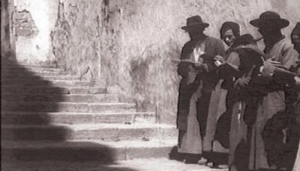 For 700 years, from 1267 to 1967, Jews were humbled and humiliated at the site and only allowed to approach as far as the seventh step of the outside Eastern stairway.  Here they prayed and wept and longed for the day when they would once again be able to pray freely at the holy graves of the matriarchs and patriarchs of the Jewish people.

In the meantime, the Moslem authorities erected several minarets at the site, and encircled the the memorials to the Jewish Patriarchs and Matriarch with Arabic verses with the clear intention of giving this Jewish holy place a Muslim identity.

The Cave of The Patriarchs Today 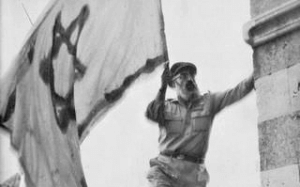 In 1967, during the Six-Day War, Hebron was miraculously liberated by Rabbi Shlomo Goren, then Chief Rabbi of the Israel Defense Forces, when he rode into Hebron on his jeep, and the Arabs surrendered to him without firing a shot.  Rabbi Goren then blew his shofar, as he had blown it hours before on the Temple Mount in Jerusalem, signalling the return of this holy site to the Jewish people.

Since then, the site has been open to people of all faiths to visit and to pray at holy grave of the fathers and the mothers of the Jewish people, who brought the God of Israel to the world.

The 1993 Oslo Accords gave the Palestinian Authority over many of the areas in Judea and Samaria, and in 1995 the Wye River Accords gave the Waqf (the Muslim religious authority) control of the Cave of Machpelah, including the entrance to the cave and Isaac and Rebecca’s cenotaphs. Jews can pray in the outer section of the building most of the year and are only allowed to visit  Isaac’s cenotaph in the main hall of the building for just ten days of the year.

Included in those days is Shabbat Chayei Sarah in which Jews read the portion of Torah which describes the purchase of the Cave.  This Shabbat is a huge celebration of Jewish attachment to the Land of Israel in general and to Hebron in particular.   Photo

Today, the building above the caves continues to be open to all. The eastern steps, including the “seventh step” – have been removed. The minarets can still be seen above the building as well as remains of the crusader castle wall on the southwestern side.

Exploring Inside the Tomb of Machpela

The cave beneath the building was discovered in 1980 by members of Midreshet Hebron learning center. Founder Noam Arnon writes, “Following the return to Hebron, Jews desired to reach the actual cave of the Machpelah, buried deep beneath the huge Herodian structure. Defense Minister Moshe Dayan, an amateur archeologist, tried to seek information concerning the underground caverns. Within the large hall, under a brown monument, there was a hole in the floor, rumored to be an entrance into the Caves of the Machpelah themselves. However, the diameter of the hole was extremely narrow – 26 centimeters.”

A 12-year old girl named Michal agreed to be lowered beneath the ground, where she explored the entrance to the cave and described it to Moshe Dayan.  Read more about what Michal discovered 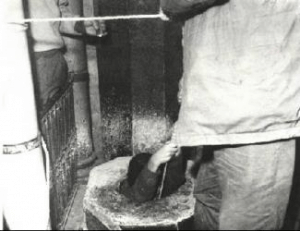 Moshe Dayan wrote out Michal’s description and made a sketch of the corridors and stairways leading to the underground caves.  However, the caves themselves remained a mystery.

The young men from “Midreshet Hebron”, were determined to explore further, and they planned a daring operation to enter and explore the cave more thoroughly.   Read Noam Arnon’s first hand description of what he saw.

The Special Power of Prayer at the Cave

Hebron is of no economic or strategic importance. Its only signiﬁcance is spiritual, religious and historic. Many say that it is impossible to explain the existence of the Machpela Tomb without believing in miracles.

It is said that in a very deep spiritual dimension, though asleep, dead and buried, the Forefathers beg for their children: “The rabbis have taught: Six (people) were not under the jurisdiction of the angel of death: Abraham, Isaac, Jacob, Moses, Aaron and Miriam…”(Talmud Bavli: Baba Batra 17a)

As the gateway to the Garden of Eden, Adam, the first man, saw a ray of divine light emanating from the area.  Sensing it’s special power, he dug the cave as a burial place for himself and his wife. The Zohar, the ancient text of Jewish Mysticism, encourages Jews to prayer the Cave of Machpela as  a place of connection to God’s light and God’s compassion, whenever the world is in special need of mercy:

“The Slumbers of Hebron”-rise and go to the earthy Garden of Eden where all the spirits of the righteous are found and they wrap themselves with a crown of light; they consult with them, and declare a decree. The All-Mighty is bound by that decree and does their will to show mercy on the world. And when the world is in need of mercy and the living go and inform the souls of the righteous and weep over their graves-then the righteous people who are on the proper level to bond their soul with those of the righteous departed. Then the souls of the departed righteous awaken and gather to go to the “Slumbererss of Hebron”[the Forefathers] and inform them of the world’s plight and all go up to the gate of the garden of Eden and inform the Ruach surrounding the Garden of Eden have supreme angels among them and all of these inform the Neshama (a supreme soul) and it informs the All-Mighty and all together beg mercy for the living and for their sake, the All-Mighty bestows His mercy on the world. (Zohar Beresheet 39:1)

The Cave of Machpela has been a site of prayer and source of inspiration for thousands of years. In the weekly Torah portion of Shlach, Moses sends twelve spies to survey the Land of Israel before entering it. Ten spies return with fearful reports, declaring their desire to remain in the desert, in Exodus, rather than ascend to the Land of Israel:

“We are unable to go up against the people, for they are stronger than we… There we saw the giants… in our eyes, we seemed like grasshoppers…” (Numbers 13:31-33)

However, Joshua and Caleb return encouraging the Jewish people to enter the land despite the perceived danger. Why was their report different than the other spices? According to Rabbi Abba ben Joseph bar Hama (better known as Rava), “Caleb separated from the counsel of the scouts and went to pray in the Cave of the Patriarchs,” becoming inspired and encouraged by the Jewish Forefathers.

Until today, the Cave of Machpela is a source of inspiration for all those who visit.