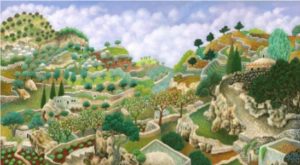 This parsha begins the preparation for the ready settlement of the Holy Land after forty years Israel spent in the Wilderness. Indeed, this painting depicts the settlement of Israel in the Holy Land. We see, to the left, three portions of land with ten plants within each. We also see seven almond trees and three olive trees. The almond tree – “shaked” – is known in the Tanach to represent quick vigilance, as also the almond tree is one of the first trees to bud, already in the early winter. The olive tree, in contrast, buds relatively late and is also known for its “old” quality as olive trees have known to have life spans of hundreds of years. Thus, the almond tree may represent the attribute of early youth, while the olive tree may represent the more aged. This matter may reflect the Kabbalist’s division of the ten sefirot into two groups, one of three sefirot and another with seven sefirot. The seven sefirot indeed reflect a more basic stage of existence as is common in youth, while the “upper” three sefirot represent a stage of higher spiritual and mental consciousness associated with the more aged.
Although this painting is very rural, we do see houses that seem to represent the Jewish settlement in the Land of Israel. We see seven houses, a favorite number in the Torah and also in Nachshon’s paintings. We see ten gates – seven on the left side of the painting and three on right/center of the painting, while the tenth is under the stairs. This again follows with the Kabbalistic teaching we just mentioned, which groups the sefirot into two groups, one of three sefirot and the other comprised of seven, which are indeed associated by the Kabbalists to the right and left aspects, respectively. By the way, also notice that these four stairs may correspond to four Kabbalistic worlds ascending one on top of the other, as we already noted in the painting for parshat Chayei Sara. Also, notice seven terraces to the distant right, again the favorite number.
The emphasis on the number seven in this painting can be interpreted in another meaning as well. Since the Holy Land has many commandments associated with it pertaining to the Shemita – seven-year cycle and the Yovel, which comes after seven Shmitot, therefore it is quite befitting that a painting that emphasizes Israel’s settlement in this Land, by which these mitzvot pertain to, also emphasize the number seven associated with this Shemita cycle.