The Holiday of Redemption 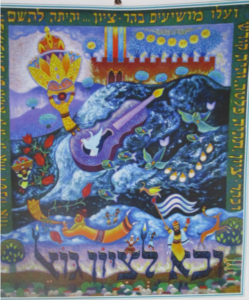 There are seven matters in this painting, and each one of them has seven figures: suns, trees within Jerusalem grouped together, fish, lights, pomegranates, hasidim whose face faces us, and trees surrounding Jerusalem. There is also an eighth aspect, such as the hasid whose back is facing us, the eighth tree and sun separated from the group of seven, an eighth (small) pomegranate in the hand of the hassid and detached from a branch. Indeed, the Torah places emphasis in many places on the number seven, and an eighth aspect that is associated but yet distinct from them, such as in Shmini Atzeret. In a similar way, Pesah, the holiday of redemption, has seven days (Biblically and also in practice in Israel) and then there are seven weeks (of seven days) that lead up to the “eighth day” – Shavuot.
In this painting we also see references to Mashiach and King David, considered the prototype of Mashiach, such as the guitar-shaped musical instrument and a flame emerging from it, hinting to “arichat ner” – “setting a lamp” – leven yishai meshichehcha” – “for the son of Yishai your anointed one.” We see a crowned figure/hassid holding a flag at the bottom of the painting, The flag seems to be a sign of regal sovereignty as flags may represent. Of course, there is also the crown on the top of the painting which seems to hint at Divine Monarchy, as through the Mashiach God’s Majesty and Rule will also be manifest, as it says “and then Hashem will have Kingship… on that day Hashem shall be One and His Name One,” a verse explicitly phrased in the borders of this painting. We see Jerusalem and the Temple along with a hasid bringing bikurim to it. This of course is compounded with the verses about Redemption surrounding the painting, talking about the redemption through mount Zion, also painted here in the form of Jerusalem/the Temple, and the manifest Kingship of Hashem in the future.
There is also a figure blowing the shofar which is an instrument that heralds the redemption as we learn in the Tikunei Zohar about Hebron “At that time (the “end of days”) the three Patriarchs
will adjoin with might, and Truah, Shvarim, Tkiah will be sounded, and with them, the “the earth shall shake”, and this will be in the “end of days”, and all these miracles will be in the Land of Israel, for there is Hebron where the Patriarchs are buried.”(Tikunei Zohar 13, 28b)